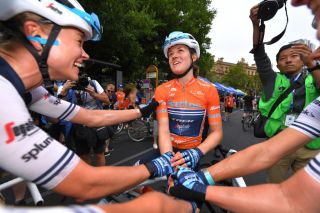 Ruth Winder with her Trek-Segafredo teammates at the Tour Down Under (Image credit: Getty Images Sport)

While a gaggle of US-based pro riders have been able to return to Europe in the last week as travel restrictions are lifted that's not the case for US national road champion Ruth Winder.

The Trek-Segafredo rider, based in Boulder, Colorado, has no confirmed date for when she will return to Europe, and with the Women's WorldTour set to begin in less than a month there are huge levels of uncertainty for the 26-year-old and her short-term future.

The winner of the 2020 Tour Down Under remains on standby and keeps her spirits high as best she can, but the unfamiliarity that comes with the current state of cycling and the impact stemming from the COVID-19 pandemic has been tough to deal with.

"There's not too much of a plan," she told Cyclingnews from her home in Boulder. "It's hard to make any plans right now with the government regulations changing so frequently.

"I don't have a flight booked as of right now but the hope will be to still get over to Europe but as to when that date remains a little unsure. I'm still waiting to hear from the team, to be honest, about how to get over. I don't know if I can get over. I don't really have any answers for you.

"Obviously, I want to get over, and I think at this point it will likely be at some point in August, and before the big block starts. That probably means missing Strade Bianche at this point, but it's really frustrating because we don't really know. Some people have been able to get over because they have residency in other countries but I don't have that."

While the situation around COVID-19 in most of Europe appears to be under control, the landscape in the US is very different. The country continues to see record levels of infections and the nation sadly leads the way in COVID-19 related deaths.

The situation means travel restrictions could alter repeatedly over the coming days and weeks, and Winder is unsure if when or if she will be able to travel across the Atlantic.

"I've not let myself think that yet," she said when asked whether she may have to remain in the US for the rest of the year.

"I'm remaining somewhat hopeful. We're just going to have to wait and see. There's so much uncertainty and part of me questions if racing is even going to happen. Our national championships in the US got cancelled. I'm not sure what it's like in Europe but right here in the US things are just getting worse and it's at the very forefront of my mind.

"It's a huge part of how we're living right now. I know that it was bad in Europe in some areas, but has now improved. Maybe the mentality there is a bit different but in the US it's still pretty scary and pretty out there. it's just a really odd time."The last few months, since lockdown was first initiated, have been tough on riders. They're used to travel and the hectic life of being athlete, so being told to remain inside for weeks on end has a knock on effect when it comes to confidence and motivation.

Winder has kept busy and trained hard over this period, even joining the Everesting craze, but not knowing when 'normal' would return has been difficult.

"I think that it's a rollercoaster of emotions. Some days it's fine and you think 'you've got this' and you go with the flow but it's quite hard for me because I'm someone who likes a schedule. The uncertainty is playing on my mind quite a lot, if I'm being perfectly honest. Some days I think I've got it and then other days I'm just freaking out. It would be nice to have some answers."

Safety in the time of COVID-19

Those answers will take time but assuming Winder returns to Europe on time, there's still the matter over how safe racing and traveling will be.

All of the measures talked about by race organisers and the UCI  have never been used in cycling and there's no concrete plan of action if or when a race has its first COVID-19 positive.

"I'm really nervous, to be honest," says Winder. "I'm nervous because although cycling is a no-contact sport we're still in a bunch with 150 people. You have to be doing so many tests all the time because each team has riders, six members of staff and that's a lot of people close together and a lot of travelling.

"Right now I've barely left my home. I don't hug my friends. I wake up having had dreams of hugging my best friends. So it feels weird that we're going to go and race our bikes around Italy, which has had a really hard time with the virus.

"It all seems odd; it seems scary and unsure. I'm trying to have faith and trust that we're going to be doing the best things as safely as possible but we don't know the lasting damage on peoples' lungs if you do get the virus. It feels a bit scary and a bit intimidating."

The next question surely has to be whether Winder wants to come back.

"That's such a hard question. Yes, I want to race my bike and to be competitive and part of the races but right now the way racing is and how the world is, isn't how things were when I last raced my bike.

"Yes I want to race, and if everything is taken seriously, and I'm not a scientist, and it's all done in the safest way possible then I want to be there. If there's a high risk of getting sick or making my friends, family or team sick then I don't want to be a part of that."

If Winder returns, and if racing is as safe a possible, then August to October will be festival of women's racing with a flurry of major races dotted through the late summer and autumn.

After months of complete inaction and virtual racing, the women's peloton will be desperate to start on the road again. Winder is targeting several high-profile races, from Plouay to the Ardennes and stages in the Giro Rosa. The key to success, she thinks, will be for riders to pace their efforts and take each race as it comes.

"For me, it's going to be about looking at each race one day at a time. You could easily look at this calendar and become overwhelmed with how quickly races come back to back, so just trying to focus on one weekend, instead of looking at a whole month is important. You need to take care of yourself but I also have faith in the team to create the right schedule.

"At Trek-Segafredo we have such a strong team that I think that we'll find a really good balance for everyone I think. We've not had our sponsors out there so we're all going to want to put on a good show for those that support us and the fans.

"I think that it's going to be really aggressive racing, and some riders' contracts will be up and they'll be nervous about next year. Racing is going to have a really interesting dynamic."