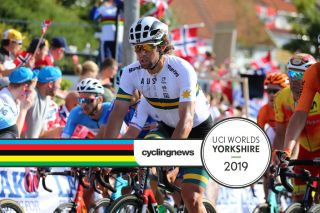 The men in green and gold have secured just one rainbow jersey in this event at the World Championships with Cadel Evans taking the spoils exactly ten years ago in Mendrisio. Simon Gerrans – now retired – came close in 2014, while Michael Matthews has finished second, third and fourth.

Since the turn of the century, Australia has performed admirably in the elite men’s race with Allan Davis, Robbie McEwen and several others picking up top-10 places. Simon Clarke is the only survivor from Evans’ win in 2009, and the EF Education first rider will act as the squad’s road captain in Yorkshire.

After the disappointment of missing out on a place in Innsbruck last year, Michael Matthews returns to the Worlds stage and leads the line for a robust Australian team. His record at the Worlds is incredibly consistent but the question remains as to whether he can beat the absolute elite when it comes to the grandest one-day race outside of the Classics.

Below Matthews in the pecking order sit road captain Simon Clarke and Jack Haig. Both riders are in peak form coming into the Championships and will look to support Matthews as the race enters the final few laps. Rohan Dennis will line up as another support rider but with no road racing in his legs since he quit the Tour de France he will likely be deployed in the early phases of the race. The rest of the team will have crucial domestique roles, as road coach Bradley McGee told Cyclingnews earlier this week.

“We’ve got a good stock of riders who know how to race World Championships. We’re confident that they know how to combine and they can deliver on their roles,” McGee said.

“It’s about support, support, support and our support riders delivering on roles. That’s key. At the end of the day to win these things you need to be prepared to lose them and be comfortable with that.”

The Australian team runs like a well-oiled machine and McGee has created a positive atmosphere amongst his riders. There’s clear definition within the line-up, with Matthews the designated leader and a world-class secondary that includes the dependable Clarke and ever-improving Haig. This is also a team that has matured together, and McGee was keen to pencil in his eight-man selection well before the Championships.

“We want to get in early, have a core and then assign roles. Of course, things do change put we want the riders to have a strategy so that they can get their heads and their legs around what they need to deliver on,” he told Cyclingnews.

“Essentially you go with who can get the job done. We’ve got a good stock of riders who know how to race World Championships. We’re confident that they know how to combine and they can deliver on their roles.”

Matthews is undoubtedly the star and his win in Quebec earlier in the month was a timely reminder of his class on the bike. McGee has not only assembled talent but he has matched the line-up with what’s required for the Yorkshire course.

“I came here a year ago, straight after Innsbruck. I chucked a few laps and immediately started thinking about what style of bike rider that we needed. You need to have skillful riders who can ride together on the skinny roads. Then you want riders who can have the distance in their legs and still deliver on that final circuit. You start to pencil in a few names.”

It’s hard to find fault with this team. They may not have the options of Belgium, the proven winner in Sagan or the man of the moment in van der Poel, but McGee has almost every base covered. There are arguably stronger individuals missing from the Australian roster but power and palmares don’t always combine to create the best of teams. That said, while Matthews is the undoubted leader, he will need to produce the ride of his life to win. He has everything in his locker - bar that rainbow jersey (for now).

The view from Australia

Australia will have no excuse to be anything other than cohesive in the elite men’s road race where Michael Matthews will be back in the green and gold driver’s seat. The World Championships carry meaning for Matthews and since winning the under-23 title in 2010 he has missed just two senior editions – last year and 2011.

Unification has been the PR line Cycling Australia has played on repeat since Simon Jones took over high performance in 2017, selecting teams and specifically leaders well in advance. Matthews has been talking about Yorkshire since this time last year.

It is a measure from the British Cycling playbook that Jones brought down under when he joined the federation and initially copped backlash for packing what he was asked to bring – change.

The 2015 silver medalist Matthews is an interesting prospect along Yorkshire’s undulating, dead roads that should suit the versatile sprinter. He is an emotional competitor, who races on form as much as he does head and heart, all of which will have to harmoniously marry on Sunday should the 28-year-old want to be in contention.

On paper, his successful title defence at the GP de Quebec earlier this month suggests he’s got form. The victory should also have served as a confidence boost following a difficult Tour de France where he was hindered and dejected by revised roles.

It’s been 10 years since Cadel Evans won in Mendrisio. Matthews can in Yorkshire but will need a real team effort and a mean kick.