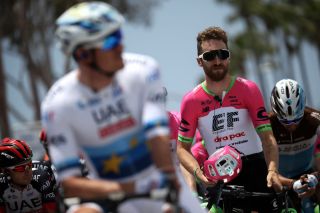 A teenaged Taylor Phinney came into cycling in the mid-2000s with the weight of expectation one would expect for the son of an Olympic champion and the most heralded road sprinter in American history.

The tall, lean prodigy looked like he was built specifically for cycling, and he quickly lived up to his pedigree and others’ aspirations. After joining Jonathan Vaughters’ Slipstream junior team in 2006, he went on to win the UCI World Championships junior time trial in 2007. He was a natural on the track as well and, a year later, he finished seventh in the 2008 Olympics individual pursuit.

American cycling fans, used to seeing Americans winning the world’s biggest races and not yet fully aware of Lance Armstrong’s systematic doping, embraced Phinney as the next great hope for plucking the European peloton’s biggest prizes.

Phinney surprises with a top-10 finish at Paris-Roubaix

Phinney further fuelled those hopes with a gold medal ride in the 2009 UCI Track World Championships before turning to the road with Armstrong’s Trek-Livestrong development team and winning the U23 edition of Paris-Roubaix. He won the U23 cobbled Classic again in 2010, and also added a U23 time trial world title to his quickly growing palmarès.

Phinney continued to show glimpses of greatness in his first year on the WorldTour with BMC Racing, taking a prologue win at the Eneco Tour. He finished 15th in his first elite Paris-Roubaix in 2012, but his breakthrough result came a year later at the Giro d’Italia, where he won the opening prologue and wore the pink leader’s jersey for three days. Suddenly, America had another star, maybe not for Grand Tour titles, but certainly for stages and for the big Classics.

Phinney started bringing in the wins in 2014, taking the prologue at the Dubai Tour and winning the overall, then putting in a solid run of results through the Classics. He won a stage at the Tour of California with a daring solo breakaway, then took his third US Pro time trial win in Chattanooga, Tennessee.

Two days later, his upward trajectory was knocked into disarray when he had to change his line in a downhill corner to avoid a race official’s motorcycle and crashed into the roadside barriers. Phinney suffered a compound fracture to his tibia and a severed patellar tendon, requiring surgery and a 14-month rehabilitation.

Phinney returned to racing in August of 2015 at the Tour of Utah and was immediately back in the action, finishing third on the opening stage behind Boulder friends Kiel Reijnen and Alex Howes after the trio slipped away in a small move near the end of the race.

Phinney saved the first win of his comeback for his home state, however, winning the opening stage of the USA Pro Challenge in Steamboat ahead of Reijnen again in a sprint.

Mouths of American cycling fans began to water as the golden child had apparently returned from the brink and was ready to pick up the mantle of European conquerer. But a funny thing happened during Phinney’s 14-month recovery and hiatus from bike racing; he discovered life.

In a 2015 interview with Peloton Magazine, Phinney opened up about the experience and hinted at what has been driving his decision to retire for some time.

"I’ve spent a lot my career basing my trajectory off of Tony Martin or Cancellara or Wiggo, but having been removed from everything these past couple months, I almost got a taste of what it’d be like to not be a bike racer," he told journalist Daniel McMahon at the time.

"It was hard. There were times when the USA Pro Challenge came through my hometown and my team came and hung out with me at my apartment. I was so upset I couldn’t race," he said. "But I stayed true to my mission and got better every day and gained basic mobility. I realised that sports are not the end of the world, and what’s important to me is that I lead a fulfilling life. I’m not afraid to let go anymore."

Phinney moved from BMC Racing in 2017 to EF Education First, a team run by Vaughters that has a roster with many familiar Colorado friends. He set about racing again, but something had obviously changed. The results did not come like they had in the past. Although Phinney’s physical gifts seemed to be back, his head was no longer in the game the way it needs to be for a successful cyclist.

Over the following four seasons, he added only one more win, taking the US time trial title in 2016. Phinney, who developed a gracious and generous attitude toward his fans, showed signs of brilliance again last season with eighth in Paris-Roubaix, but his 2019 performances once again lacked the potential he showed earlier in his career.

Phinney failed to make the time cut on a flat-but-windy Tour of California stage in May, and he didn’t turn up at a UCI road race again until August after having participated in the Dirty Kanza gravel race and the Leadville Trail 100 MTB race.

Rumours that the 29-year-old wouldn’t renew his contract with EF Education First started earlier this summer and increased in magnitude as the end of the season approached. The team made the announcement official on Wednesday that Phinney was stepping away from the sport. He’ll race professionally on the road for a final time at the Japan Cup in October 20.

In a statement released by the team, Phinney said the decision is something he’’s been wrestling with for several years.

"I feel like my body sort of made this choice for me. I've now been injured longer than I've not been injured as a professional athlete. And I felt that it was a good time to click out and trade in my chips and get out of the casino," he said.

"The support network that I've had through EF Education First, and then before EF with BMC, has been paramount to being able to stay on the bike and being able to line up for races. But at some point, you don't want to just be lining up for races to finish them.”

Phinney said he is stepping away from the sport to pursue new creative passions, including art and music.

Phinney also addressed the expectations that have been put on his cycling potential from a very early age, and how he feels about walking away from a sport for which he has so much obvious talent.

"I'm grateful that people would like to see me do amazing things on a bicycle," he said. "But the reality is, being touted as something, having talent or being told that you have talent – talent is nothing without work ethic, and work ethic comes from genuine passion for what you're doing. And if you are constantly forcing your work ethic because your passion is elsewhere, then potential and talent mean nothing."

In late August, 29-year-old NFL quarterback Andrew Luck walked away from a potential Hall of Fame career and multi-million-dollar contract, saying constant injuries had taken away his love for the game. Phinney found himself in a similar position, albeit with less money and publicity on the line.

"I think that there's a lot of power in recognising that you don't have the genuine passion for the thing that you're doing anymore, and then having the courage to make that choice, to make that decision when you're so deep in it," Phinney said. "I feel like I've been basically preparing for this for a while now, cultivating the ability to voice my honest opinion and say, ‘I think that I don't want to do this anymore'.”

Reaction to his decision has been overwhelmingly positive, he said.

"I mean, there's a little bit of surprise involved, but then anybody who knows me, who really knows me, they're just very happy that I was sort of finally able to make this decision."

Cycling fans have not seen the last of Phinney, the Boulder native promised, as he hopes to "change cycling from a different angle". And there’s still the possibility that he could be pinning on a race number in the future.

"You may or may not see me in an enduro race next year," he said. "If I'm going to race anything, it's going to be that. I just want to shred, you know? I was born into a cycling family, but I really fell in love with sport through freestyle skiing... Like Jonny Moseley and Shane McConkey. Shane McConkey especially was my number-one hero. And I decided to be a cyclist instead of a skier because, somehow, I thought it was safer for my body, and I was also better at it.

“But now I've sort of had this return to freestyle extreme sports through my mountain bike, and it's... I feel like a 15-year-old again."