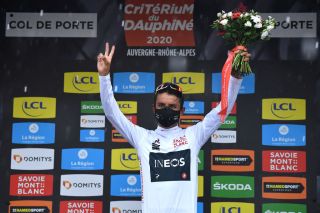 Speaking to a rider post-stage at the recent Route d’Occitanie, about their objectives for the Tour de France, with barely a pause he responded: "Do you honestly think the Tour is going to happen?"

After racing was suspended for almost five months, seeing four days of action at the Route d’Occitanie go ahead without a virus-related hitch was encouraging. The precautions that the race organisation had taken worked.

These included supplying spectators lining the finishing straight each day with masks and instructing them to wear them correctly, with no below-the-nose slippage allowed. Fans and VIPs were also prohibited from entering the paddock areas where team buses parked at starts and finishes each day.

The atmosphere around the race was as festive as in any 'normal' season. The climbs were busy with fans, the key ascent of the Col de Beyrède on day three particularly so. According to the riders, apart from the sight of many spectators in masks, there was little to mark the race out as unusual.

Ten days on from the end of that race, the atmosphere at the Critérium du Dauphiné is quite different and much more tense. This is partly down to the level of the event, which is a WorldTour race and a couple of steps higher in the event hierarchy than the Route d’Occitanie, with the subsequent high quality of the field, many of whom are getting a final chance to assess their form and their rivals before the biggest race of the year.

The Dauphiné is being used by organisers ASO as a testing ground for a raft of health-related initiatives that are set to be implemented on a much grander scale at the Tour de France.

At a macro level, the organisation is attempting to keep the teams isolated within their bubble. Unlike Occitanie and other smaller races that have taken place since racing restarted in late July, the team paddock is off limits to everyone bar riders, team staff and in-race officials. The media only get access to the riders when they pass through a mixed zone located close to the buses each day. Interviews at team hotels, press conferences and any other contact outside these well-policed areas are prohibited.

On a micro level, there are a host of other health-related regulations. Members of the media, all of whom had to provide confirmation of a negative PCR COVID-19 test in order to obtain their accreditation, are told to keep a distance from each other, one person to each 'pen' within the mixed zone, or two if there’s a camera operator working together.

Requests for interviews in these areas are made through each team’s press officer and interviews are supposed to be limited to a maximum of two questions. The media must social distance from the riders, with many using long recording booms and selfie sticks to ensure they maintain a gap of 1.5 metres. During interviews, riders can remove their masks if they wish (this is the only time they can be removed by anyone within the confines of the race), although most choose not to. Recording equipment must have a new cover placed around it in between each interview, or be disinfected with wipes or a spray.

The precautions have hitherto been effective. Each day, riders, team staff, the organisation, the media and, of course, the fans become more accustomed and more accepting of this new normality. Debates about prospects for the Tour de France continue to dominate but the sense that the Tour will not only start but will reach Paris is also growing, even as the rate of COVID-19 infections begins to rise once more within France.

Speaking at the start of the Dauphiné’s second stage in Vienne before he crashed and retired from the race, Dan Martin spoke for many when he said that he had no idea whether the Tour will go ahead.

"But you can see the massive effort that the organisers are making to ensure the Dauphiné happens and happens safely, and I think as long as this race goes on without any hitches I think we can hope for a safe Tour," said the Irishman.

"Obviously, they’ve got the support of the French government, which is really important, and fortunately this year the Tour doesn’t cross any international borders and most of the contenders are already in France. A few weeks ago I was a bit more pessimistic, but hopefully we can now look ahead to that Grand Départ in Nice."