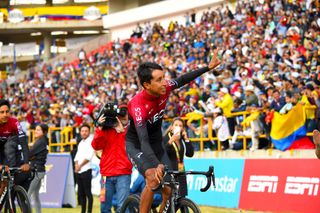 Egan Bernal waves to the crowd during the team presentation at the Tour Colombia 2.1 in February (Image credit: Bettini Photo)

Colombian cycling reached a zenith last year when 22-year-old Egan Bernal climbed to the top of the final Tour de France podium in Paris, taking the ultimate step on a path to international success that started half a century earlier with Martín 'Cochise' Rodríguez – a world champion on the track, the first Colombian to enter the World Championship road race and a winner of multiple stages at the Giro d'Italia in the early 1970s.

But the story of Colombian cycling talent is really only just beginning, as a thriving grassroots scene pumped to full volume by the current generation of stellar riders – and now a Tour de France champion – could unleash a tidal wave of talent on the European cycling scene for decades to come.

The South American country of nearly 51 million people shines on the international stage thanks to a handful of riders who have climbed to the top of the sport's hardest and most-celebrated races.

Following in the footsteps of Colombian heroes from the 1980s and '90s like José Martín Farfán, Omar Hernandez and Luis Herrera – the 1987 Vuelta a España winner who won the polka-dot jersey at the Tour de France in 1985 and 1987 – Nairo Quintana has flown the Colombian flag in the winner's circle at the 2014 Giro d'Italia and 2016 Vuelta a España while finishing second twice at the Tour and third once.

Rigoberto Uran has finished second at the Giro d'Italia twice and was runner-up to Chris Froome at the 2017 Tour, while countryman Miguel Angel Lopez was third at the both Giro and the Vuelta in 2018. All of them, along with Esteban Chaves, are consistently fighting for stage wins and at the font of the general-classification herd. EF Pro Cycling teammates Dani Martinez and Sergio Higuita also appear ready to start leaving their marks on Grand Tours.

Although it is often outgunned by countries with longer cycling traditions and deeper talent pools, Colombia is currently fourth in the UCI's [now suspended] 'Nation' ranking, coming in just ahead of the Netherlands and behind cycling powerhouse countries Belgium, Italy and France. Considering the smaller number of Colombians at cycling's top level, however, it's an achievement that is brighter than it may appear at first glance.

Belgium, Italy and France have 55, 55, and 56 riders each at WorldTour level, respectively, while Colombia has just 22. The climbers and general-classification riders coming out of Colombia continue to punch above their weight, and the country is regularly producing quality sprinters now as well, led by Fernando Gaviria, Juan Sebastian Molano and Alvaro Hodeg.

Setting foot on the ground in Colombia and taking in the cultural support and enthusiasm for cycling, there's little reason to believe the country's trajectory will go anywhere but up from here. The bicycle is a staple of transportation for people there who are both on the job and getting to their jobs, and bicycles are ubiquitous. Urban environments like Bogota and Medellin have bike lanes and traffic patterns that can be helpful and hazardous to bikes, but riders are everywhere, on 10-speeds, fixed gears, cruisers and everything in between.

In the less urban and modernised landscapes like Duitama, in the department of Boyaca, where this year's Tour Colombia 2.1 took place in February, there are few established bike paths, but the longtime presence of bikes mixed in with traffic seems to have earned the two-wheeled human-powered machines a place of, if not respect, at least tolerance in the traffic hierarchy.

On the crowded, narrow streets of Duitama, amid the wild-west, fortune-favours-the-bold traffic in the most congested parts of town, people on bikes ride confidently without feeling the need for helmets or hi-viz clothing, instead relying on patience and cooperation from their fellow road users to safely get where they're headed.

Cars, delivery trucks, taxis, buses and the hordes of motorcycles wait for and make room for bicycles. Nary a horn is honked or curse word directed at the cyclists, because the bicycle's place on the road is established and the other drivers don't feel entitled to that space.

The dynamic is something to see for someone from the US, where that is definitely not the attitude toward bikes. That courtesy is also extended to recreational riders, who are plentiful on the winding roads that climb into the mountains as well as the four-lane highways that connect the towns.

Outside the cities, drivers show the same patience and lack of entitlement when dealing with recreational riders, treating them as other road users, for whom they make room. Large groups of riders would take up the entire right lane of a divided highway, and approaching traffic behind them would slow down and wait to change lanes when it was safe to go around. There was no honking or curse words. The cyclists' presence was simply accepted.

It was the same when a police escort shut down both lanes in one direction so that Bernal's Team Ineos squad could train for the team time trial without having cars pass. There was no hostility among the people in traffic creeping along behind the team – just patient acceptance. Again, I don't know about attitudes toward cyclists where you live, but that would not have been the case here in the States.

It's no wonder, then, that parents feel confident letting kids ride. And the kids are everywhere: out with their parents, with friends their own age or mixed in with groups of adults. They come in all ages, riding bikes with varying degrees of quality, price point or proper fit, and wearing kits with the same distinctions, but all brimming with enthusiasm.

Bernal's Tour de France win last July has only served to intensify the passion Colombians have for cycling. When the now-23-year-old raced at the Tour Colombia 2.1 in his home department and hometown, the race supplied a half dozen police officers to surround him wherever he travelled, including his short pass through the press mixed zone on the way to the podium each day.

In every display sign advertising the race or its sponsors, and in every TV commercial featuring Bernal pushing various products, he was featured in his yellow jersey from the Tour de France. Vendors at every start and finish crammed their tables with yellow-jersey memorabilia, and the fans snatched it up so much that sometimes it looked like every baby in town was wearing a yellow Ineos onesie.

The kids in Colombia have noticed, and you can see it in their riding, decked out in the best gear they can afford and no doubt pretending they're one of the current crop of Colombian heroes climbing up Alpe d’Huez or some other iconic French climb on the way to Tour glory. It won't be too long until some of them make it happen for real.