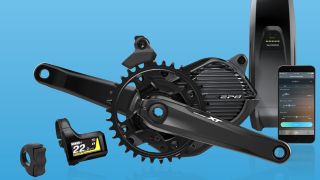 In a world where active transport is being encouraged and public mass transit could be avoided for some time due to pandemic health concerns, the electric bike is thriving. But what are the technical concepts and limitations? And how will burgeoning e-bike development influence your cycling choices in the near future?

The notion of battery-assistance for bicycles is not new, but two issues have bedevilled e-bike development: energy portability and drivetrain integration. A decade ago the battery technology simply did not exist to supply batteries which were light and compact enough, with adequate energy density and affordable pricing.

Hybridising the bicycle drivetrain was also equally challenging. Power surges ruining your pedal rhythm can make for an unnatural riding experience, and calibrating the electric motor action and rider cadence can be a complicated affair.

Of all the manufacturers, Shimano is hugely influential in the cycling world. The Japanese company produces an enormous catalogue of parts but is best known as one of the two major groupset providers – the other being SRAM.

When Shimano moves on a new product trend, it is significant due to the sheer scale of research and manufacturing resources under the Japanese brand’s command. With the reveal of its new EP8 e-bike motor, Shimano is signalling a commitment to the battery-assisted bike movement.

The inner workings of an e-bike

Sensors measure your torque input, cadence and speed, performing more than a thousand calculations a second. Once the e-bike’s sensors detect a need for battery-assistance, reacting to a master algorithm controlling the entire system, power is released from the battery pack to energise electromagnets in the motor.

No longer does a throttle actuate the motor's input, with the today's best electric bikes, your pedalling input is accentuated by the motor. This provides a smooth pedelec ride, rather than a moped-style twist and go.

An e-bike’s mid-drive motor has both permanent- and electromagnets, the latter which are energised by power drawn from its battery pack.

Permanent magnets sit in the mid-drive motor’s centre, whilst electromagnets (recognisable due to the wiring wrapped around them), surround the rest of the casing. Transistors manipulate the polarity of these electromagnets, which spin the shaft, adding pedal assistance to your ride.

Beyond the quality of your software coding, the orientation and quality of those magnets are what makes an e-bike drive system perform. The trick is to get the repelling and attracting forces between the magnets to work as best possible, which can be challenging.

Using superior quality neodymium magnets, which are very powerful, can increase your motor system’s potency and range, without requiring a higher capacity battery.

In terms of packaging as a performance feature, the Halbach array method of orienting permanent magnets can double power, but it is a challenge to bond magnets in this way, especially in a compact mid-drive motor configuring. Production costs with the Halbach array technique are also quite often prohibitive.

The consumer electronics and automotive industries have been meaningful drivers of lightweight energy-dense battery development, ideal for delivering the power and mass profile that required in an e-bike application.

With more potent battery chemistries available, designers are finally capable of packaging the e-bike’s distinguishing components in an elegant and practical way. Some current e-bikes are very difficult to tell apart from a non-assisted frameset. The Ribble Endurance SL e comes to mind as an example.

E-bike design theory is not overly complicated in principle. Unlike a moped, the e-bike provides pedal assistance through the bottom-bracket motor, as required. It has no rider modulated throttle, which is an important distinction.

As far as the best electric road bikes are concerned, your bottom bracket and lower downtube section are the structurally most important frame areas. The battery is housed as part of the downtube and nearly all e-bikes are designed to use the mid-drive motor configuration, which resides in your bottom bracket, between the cranks.

Brushless electric motors convert the battery’s energy to pedalling assistance, but they do spin at a much higher rotation than your riding cadence. Mid-drive motors use internal gearing to mediate their power output and your riding cadence, enabling rider and onboard energy source to achieve synchronisation in pedalling.

What differentiates a great e-bike from an awkward riding one, is the sophistication of its mid-drive motor’s control software. E-bikes equipped with meticulously calibrated and tested lines of code to control their response to your pedal stroke and cadence ride in a far superior way.

Sensors measure your torque input and cadence, then calculate the appropriate linearity of motor assistance required. The best e-bikes should never feel artificially electromechanical, undermining a ride with power surges as terrain gradient suddenly changes or you are shifting gear.

Product managers in the e-bike segment benchmark the feeling of riding with a tailwind as the ideal. The latest generation of e-bike control software algorithms create a sense of gliding along at higher speeds, whilst maintaining a natural cadence.

The battery-assisted nature of an e-bike ensures that cyclists are unlikely to witness a ‘power output war’ between suppliers – due to the absence of a hand throttle and the risk of triggering strict government speed and safety regulations.

As with other areas sof cycling, reducing mass and aiding efficiency is the goal. Enhanced energy density in the battery systems will see improved range with equivalently lower mass, instead of engineers chasing higher speed and acceleration characteristics with more powerful motors and larger battery packs.

Shimano’s new EP8 motor is evidence of this approach and tallies notable gains in its four-year development cycle since the original E8000 STEPS drive-motor system was launched. It is 21% more powerful than an E8000 system, has dropped 10% in mass and is a similar percentage smaller in terms of overall size, making it much less of a hindrance to package for frame designers wishing to integrate e-bike functionality into an existing or new model line.

Shimano’s lasting commitment to mid-drive motor development and drivetrain integration software is indisputable with the launch of its new EP8 system.

Of all the traditional cycling component brands, Specialized has shown the greatest willingness to invest in e-bike technology, with its own engineering assets. Shimano's new EP8 system should also trigger broader competition between these larger cycling companies, which ultimately benefits the customer in terms of choice and diversity of price.

Don’t expect your future e-bike to be massively powerful and capable of outrageous speeds. That has never been the purpose of battery-assisted cadence. But if you need something to defeat that awful late afternoon headwind or link some steep climbs on a route in fading light, increased rivalry in the e-bike market will deliver you a much better battery-assisted ride.