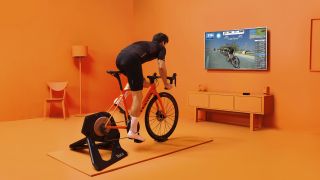 The notion of whether or not to incorporate strength training into endurance training in order to improve performance is a hotly debated topic as far as sports science doctrine is concerned.

Athletes and coaches alike are hesitant to incorporate strength training into programmes due to the notion that increased lean body mass or the reduction of time and/or quality of on-the-bike training can have a negative impact on performance.

A major factor in many cycling races is the ability to generate a high power output over a short period of time. This is particularly useful when trying to close a gap, break away from the peloton or perform a good finishing sprint.

When used concurrently with endurance training, heavy strength training improves the ability to produce such efforts.

How to get fit fast and smash your goal event

10 training tips to help you nail your next sportive, even though it’s not a race

By introducing strength training into the training program and combining it with endurance training, there are a number of protentional mechanisms that may result in improved performance, these include:

Before you begin any form of heavy strength training, it is highly recommended that you undergo a period of light gym work, often termed anatomical adaptation, where the focus is on learning to perform the techniques correctly with a light load. This will help to prevent injuries. Once you have completed this phase of training you can follow the guidelines below to incorporate strength training into your training plan:

When starting any form of strength training, the goal should be to include exercises where the muscle action, muscles engaged, and the movement pattern should be similar to the action on the bike. In cycling, the muscles around the hip, knee and ankle joints are required to work together in order to generate a force on the pedals, so this should be your primary focus.

When starting off with strength training you should reduce your total endurance training volume. A side effect of the introduction to strength training is an increase in DOMS (Delayed Onset of Muscle Soreness) often described as 'heavy' or 'sore' legs. By simply adding strength training to an already high volume training load, you can negate any positive improvements to be found in cycling performance.

The off-season: how the pros transition from race to rest and start again for next year

The benefits of training indoors for an event

Research has indicated that two sessions per week over an 8-12 week period are sufficient to achieve strength increases. It is recommended to perform between four and 10 reps with two or three sets with approximately two to three minutes of recovery between sets. Start with lighter loads and then progressively increase weight while reducing reps.

It is important to start each session off with a 5-10 minute general warm-up followed with a more specific warm-up (this can be an exercise used in your session where you progressively increase the load). Once your warm-up is completed, focus on the exercise that incorporates the largest muscle mass first, following by two to three exercises important for the muscles involved in the pedalling action.

Some of the exercises that can be included in your training program include: squats, half squats, step-ups, leg presses (progressed to a single leg at a time), one-legged hip flexions, and toe raises.  As you progress closer to competition and strength development is not the main goal, you can incorporate more explosive strength training exercises.

Endurance training on the bike is still the most important focus for a cyclist. For those individuals who are time-constrained and only able to complete a couple of sessions a week (three or four), it is more important to focus on the bike itself.

Luckily there are some on-the-bike strength training methods that can be done and are especially effective when done indoors on a turbo trainer or WattBike.

Torque (or big gear) efforts are performed by maintaining a high power output at a low cadence. You can incorporate some of these efforts into your training during the general preparatory phase (the first phase of your training program). These are especially effective in utilising the ERG mode function on a smart trainer where the resistance is maintained throughout the effort.