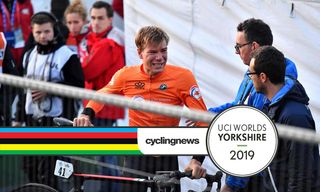 It's the morning after the U23 men's race at the UCI Road World Championships and there's only one place to start and that's with the disqualification of Nils Eekhoff from the Netherlands and the decision from the UCI jury to award Samuele Battistella (Italy) with the rainbow jersey.

Eekhoff had crossed the line first in Harrogate after a seven-man sprint but an hour after the finish it was announced that the UCI jury were investigating the result.

Another hour went by before Eekhoff was seen leaving the race in tears. His crime, drafting after crashing with around 120km to race. The UCI only checked the footage after the race, which of course led to huge uproar from fans, journalists and fellow riders. It's fair to say that this has been the biggest talking point of the race so far.

We hear from Eekhoff, his national coach, Tom Pidcock, who was bumped from fourth to third as a result, and the UCI.