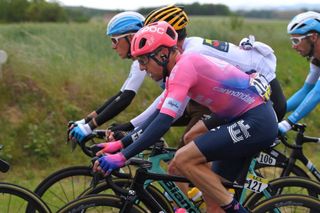 When the Canadian riders who will compete at the Grand Prix Cycliste de Québec lined up for a group picture on Thursday afternoon, it was quickly deemed that the class photo needed a little levity. "Qui va gagner à Québec?" an enthusiastic voice called out. Astana's Hugo Houle raised his arms in the centre of the shot and grinned: "Mike Woods!"

Since stepping up to WorldTour level in 2016, Michael Woods (EF Education First) has established himself as the standard bearer for Canadian cycling, and his track record means that he will carry the bulk of home hopes in this weekend's races in Quebec and Montreal.

The Toronto native has not raced since the Clasica San Sebastian in early August, which came on the back of his Tour de France debut, but he will aim to make an impact on home roads, particularly in Sunday's hillier and longer event in Montreal.

"The extra two laps are going to change the nature of the course," Woods told Cyclingnews. "The Peter Sagans, the Michael Matthews – those top end kind of hard-man sprinters – they're going to be fine even if they add two more laps. But the guys who are supposed to control the race, those guys may not be there.

"In the past you'd see the race just barely come back together for the sprint because there might only be one or two riders left to control. This year, with those extra two laps, those guys who would normally control it for their leaders might not have the legs."

Normally resident in Andorra, Woods availed of his recent hiatus to return to Canada for the first time in 10 months. The six-week lay-off is a long one at this point in the season, but it felt de rigueur after a heavy spring and summer programme.

"I was off the bike for about a week. It was needed," Woods said. "The team has leaned on me quite a bit this season for big performances. I've been looked to as a guy to score points throughout the season, so I took a week off, but then I came back here and just started training again. It was a bit difficult trying to get the training in as consistently as I would have liked because I've had so many people messaging me and wanting to catch up."

Three years have passed since Woods last raced on Canadian roads. Back then, he was best known for making the transition from a previous life of running sub-four-minute miles. Now, armed with a Vuelta a España stage win and a World Championships bronze medal, he is, most emphatically, a bike rider.

In his native country, meanwhile, his Tour de France debut this past summer resonated even more profoundly than the considerable feat of emulating Steve Bauer's achievement of landing a bronze medal in the Worlds road race.

"I wasn't a cyclist before I did this race. It's raised my profile and I'm really enjoying that," Woods said. "I came home a month ago and now I feel like I'm a pro cyclist. I get stopped in the grocery store and people asked if I'm Mike Woods."

In France, Woods was hindered by the series of crashes that left him with two broken ribs, but battled onwards to reach Paris in 32nd place overall. He left La Grande Boucle inspired rather than discouraged.

"I came out of it thinking it was my favourite race. The race is amazing," Woods said. "I want to do it again. I'm really excited that I had the experience this past year, but I also felt a bit unsatisfied because of those crashes. I felt like I could have gotten some better results, but some bad luck resulted in me not being able to do that."

In the more immediate future, Woods' thoughts will soon turn to the World Championships in Yorkshire on September 29. The parcours may not lend itself quite as obviously to his talents as last year's course in Innsbruck, in Austria, but his ambition is undimmed. Whether it's in Canada, Yorkshire or at Il Lombardia, the 32-year-old is eager to sign off on 2019 with a win.

"I still think this course [in Yorkshire] is very difficult, and it's going to play out a lot like Amstel Gold, which is why Mathieu van der Poel has got to be one of the favourites," Woods said. "It's obviously not as great of a course for me, but it's still not a bad course for me. I want to try to do as well as I did in last year's race, but it's going to be a bit of a tall task.

"I feel like I've had a really strong and consistent season, but I haven't got the big win that I've been looking for. But with the line-up of races, we have left – in Quebec and Montreal, the World Championships and the Italian Classics – there's still the opportunity for us to get that big win."