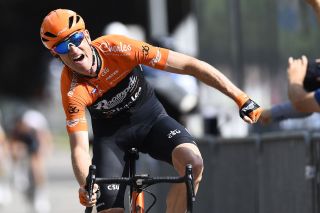 Various reports in the Dutch and Belgian media say that 39-year-old Pieter Weening will sign a new contract with WorldTour squad Trek-Segafredo for the remainder of the 2020 season. The Dutchman has been without a team since the conclusion of the 2019 season after his Roompot-Charles squad closed its doors at the end of the year.

The former Tour de France stage winner – and two-time Giro d'Italia stage winner – has been a professional since 2004, and stayed with the Rabobank team all the way through to 2012, when he joined Australian WorldTour team Orica-GreenEdge. He joined Roompot in 2016, which merged with Veranda's Willems-Crelan for its final season in 2019.

Roompot-Charles team to fold at the end of 2019

Dutch website Wielerflits.nl reported on Sunday that several sources have confirmed the rumour, but that a contract has yet to be signed, although Weening has apparently already been seen training in his new kit in the Netherlands. Belgian newspaper Het Nieuwsblad went a step further, reporting on Sunday that Weening has already signed a contract with the WorldTour squad.

Weening was still winning as recently as last season, when he took a stage of the Tour of Luxembourg, but the veteran would likely use his experience to play more of a mentor's role at Trek-Segafredo, who boast a number of younger, up-and-coming stars, not least in reigning road race world champion Mads Pedersen, last year's Giro d'Italia 'king of the mountains' Giulio Ciccone and junior road race world champion Quinn Simmons – 24, 25 and 19, respectively – who could all benefit from Weening's experience and advice. The team also fields a number of established older leaders in 35-year-old Richie Porte, 35-year-old Vincenzo Nibali and 33-year-old Bauke Mollema.

Confirmation of Weening's signing has yet to be announced by Trek-Segafredo.