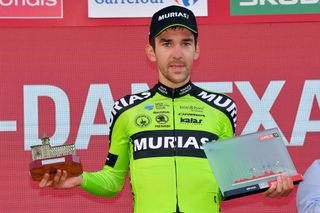 Mikel Iturria (Euskadi-Murias)  won stage 11 of the Vuelta a España after a solo breakaway that succeeded to the finish line in Urdax-Dantxarinea. The Spaniard attacked his breakaway companions with 25km to go, and then held off the chasers to take the prestigious victory.

He formed part of an initial 14-rider move that cleared the field near the start of the 180km stage from from Saint-Palais to Urdax. Iturria finished the stage just six seconds ahead of runner-up Jonathan Lastra (Caja-Rural) and Lawson Craddock (EF Education First).

After the remnants of that original breakaway crossed the line, the main field came in nearly 20 minutes down.

The large gap, however, did not disrupt the overall classification, where Primož Roglič (Jumbo-Visma) maintained his overall lead by 1:52 ahead of Alejandro Valverde (Movistar) and 2:11 over Miguel Angel López (Astana.

Watch the stage 11 highlights below.