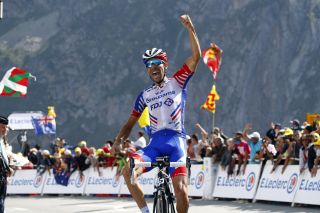 According to a report in La Depeche, the Vuelta a España could be visiting the Col du Tourmalet in 2020. The famous Pyrenean mountain was the site of a spectacular summit finale in the Tour de France this season on stage 14, where Thibaut Pinot (Groupama-FDJ) claimed the stage and Julian Alaphilippe (Deceuninck-Quickstep) extended his lead in the overall classification.

The 2020 Tour de France will not tackle the Tourmalet in 2020, finishing stage 8 in Loudenvielle after the Col de Peyresourde, then transfering to Pau for the next stage which uses the Col de la Hourcêre, Col de Soudet and Col de Marie Blanque before a finish in Laruns.

La Depeche speculated that the stage would start in Spain from either Biescas or Sabinanigo in the Huesca province and finish atop the Tourmalet.

The 2020 Vuelta a España is set to start in Utrecht, the Netherlands, with a team time trial and two stages in Noord-Brabant.

Imitation is the sincerest form of flattery

The Tour de France route for 2020 has been compared to the style of the Vuelta, with mountains packed into the first week, a route peppered with extremely steep ascents, and only one stage over 200km.

"The Tour has its own personality and it's the sport's most important event. So it's the reference point for the Vuelta, as it is for the whole of cycling, not the other way round," Guillén told Cyclingnews after the Tour route presentation in October.

"Just because there may or may not be parallels between these two or other races, doesn't mean that one is based on the other's ideas."

The route of the Vuelta a España will be unveiled on December 17.