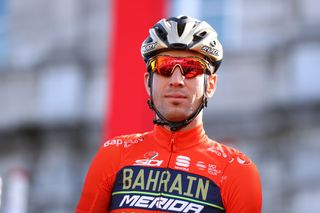 Vincenzo Nibali is a two-time winner of Il Lombardia and the Italian tifosi are hoping he can continue his series of wins in alternate years. But after a long season of racing that included the Giro d'Italia and the Tour de France, the Shark of Messina is uncertain if he can bite again in his final major race with Bahrain-Merida before his move to Trek-Segafredo for the 2020 season.

Bahrain-Merida named Nibali and Dylan Teuns as team leader, perhaps edging their bets with the Belgian after his third place in 2018, and knowing Nibali lacks the endurance and form needed to win one of the hardest Classics of the season.

Nibali was dropped early on the final climb of San Luca in the finale of last Sunday's Giro dell'Emilia, leaving him angry and doubtful. He got across to the decisive attack at Tre Valli Varesine on Tuesday only to be dragged down the wrong road by the television motorbike and other riders in the move. The lingering doubts about his end of season form and the knowledge of what is needed to win Il Lombardia, have left Nibali doubtful about his chances.

"When I won in 2015 and 2017 I was in perfect shape. That's not the case this year," Nibali told La Gazzetta dello Sport on Friday,keeping his Il Lombardia expectations in check.

"In 2017 I'd finished third at the Giro d'Italia and second at the Vuelta a Espana. If you come out of Vuelta feeling good, you recover and then you can almost play with your rivals in the end of the season races. I can see that both Valverde and Roglic have that feeling, they're floating and are strong, even tough it's October.

"I had an intense first half of 2019, preparing and then riding the Giro d'Italia and the Tour de France. I've came back from a lower level. I've found some end of season form but I'm not sure if it's enough because the racing is more aggressive in one-day races than in Grand Tours.

"To win Il Lombardia you need the endurance to go all the way and the strength to make the winning move. I'm not sure if I've got both of those this year and so I'm keeping my expectations under control.

Nibali will race, as always, with his heart on his sleeve but he knows it might not be enough this time.

"You needs the legs as well as your heart to win Il Lombardia," he warned.

"It's a special race, with the leaves falling in the hills and the end of season atmosphere, but Il Lombardia is a long, hard race. You need a piggy bank full of energy to win it; you need to have stayed focused and kept training hard in the final weeks of the season, so you need the mental focus and mental strength too. We'll find out just who is mentally and physically the strongest in the final near Como."