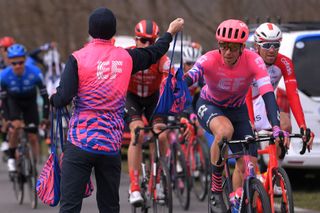 EF Pro Cycling's Sep Vanmarcke is planning to line up at the Wortegem-Petegem 'practice race' – oefenkoers in Dutch – in East Flanders, in Belgium, on Saturday, keen to pit himself against others and race, despite the event being a lower level than the Classics specialist is used to.

While professional riders are not normally permitted to line up at national-level events, they've been granted an exception ahead of the restart of professional racing following the shutdown of competition due to the coronavirus pandemic.

Asked by Sporza.be on Wednesday why he wants to take part in such a low-level race, the 31-year-old Belgian replied: "Because it's allowed, because riders still want to race, because it's a very nice set-up and will be action-packed, and because sensible people will have made it 'corona-proof'."

Like a number of his colleagues, Vanmarcke's 2020 season will restart with Strade Bianche on August 1, which means he's doing as much training – and indeed racing – as possible in the lead-up to Italian one-day race.

Sep Vanmarcke: Winning a rescheduled Paris-Roubaix in the autumn would be even more special

"I want to get back into the rhythm of racing with four practice races, and then start in the professional races again next month," he said.

Vanmarcke added that he wasn't afraid to crash, and that competing was all part of the process of reaching full fitness again.

"That there are going to be those who want to compete with me doesn't bother me," he said. "That's why it's called a race, of course.

"Anyone can take part anyway," Vanmarcke added, with the race expected to have 175 riders on the start line at the weekend. "I don't think there'll be any cowboys, and the better riders will come to the fore after a while anyway: the wheat will be sorted from the chaff."

Reigning Belgian road race champion Tim Merlier (Alpecin-Fenix), who's from Wortegem-Petegem, is also expected to line up for the race on Saturday.

Meanwhile, professionals are also being permitted to line up for the Grote Prijs Vermarc Sport kermesse in Rotselaar, Belgium, on Sunday, with riders from WorldTour teams Deceuninck-QuickStep and Lotto Soudal expected to ride.

According to Sporza, the race has had 400 applicants, with only 175 spots available on the start line.