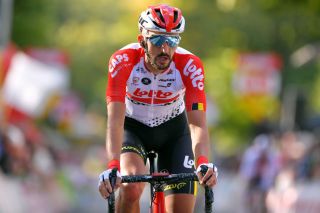 Lotto Soudal have announced that Jelle Vanendert will be leaving after 11 seasons with the Belgian WorldTour team, posting a photo tribute to the Belgian climber on social media. According to various Belgian newspapers, including Het Laatste Nieuws and Het Nieuwsblad, the 34 year old's destination for 2020 is Pro Continental squad Wallonie-Bruxelles.

Vanendert joined what was then Silence-Lotto from Française des Jeux in 2009, and went on to take a memorable solo win at Plateau de Beille on stage 14 of the 2011 Tour de France, getting the better of Samuel Sanchez, an aggressive Andy Schleck and the eventual Tour winner that year, Cadel Evans.

It was enough to give Vanendert the polka-dot 'king of the mountains' jersey, too, which he held for four days until eventually relinquishing it to Sanchez.

Wallonie-Bruxelles are likely to take part in a number of the hillier Belgian and Dutch Classics in which Vanendert has shone at in the past, having this past season secured invites to the likes of Flèche Wallonne, the Baloise Belgium Tour and Liège-Bastogne-Liège, where Vanendert has a best finish of 10th, in 2012

In 2018, Vanendert finished second overall and won a stage at the Baloise Belgium Tour – his only other victory as a pro besides his Tour stage win – and finished third at Flèche Wallonne, although his achievement was overshadowed by a spat with Lotto teammate Tim Wellens, who finished ninth, but was supposedly the team's protected rider for the race that finishes with the climb of the Mur de Huy.

Vanendert has also twice finished second at Amstel Gold, in 2012 and 2014, while his best results this season were seventh at the Clasica San Sebastian and ninth at Flèche Wallonne, indicating that the veteran climber will still have plenty to offer his new team next season.

Thank you Jelle Vanendert 👏🤗Eleven seasons at @Lotto_Soudal means a lot of memories and great moments to look back on, that's why we've assembled the best pictures in one great album.📸Photo album: https://t.co/NG271R9JqC pic.twitter.com/8v7V9vaLE3October 24, 2019