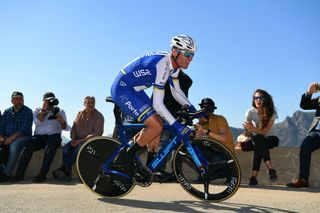 The UCI announced Monday that it has provisionally suspended Spain's Raúl Alarcón for a potential anti-doping rule violation. The 33-year-old currently races with the Professional Continental team W52-FC Porto and has a contract through 2020.

Alarcón is listed on the UCI's website under the Provisionally Suspended records. He is listed as having an adverse analytical finding/potential ADRV for the use of a prohibited method and/or prohibited substances. No date for a sample was given.

Alarcón has raced with W52-FC Porto since 2015. He is a two-time winner of the Volta a Portugal em Bicicleta (2017 and 2018) but did not go for the treble in August and has not raced since June.

According to a recent report in Cicloweb.it, Alarcón was injured this season and that prevented him from attempting to defend his title.

Alarcón started his career with Saunier Duval in 2007 but has raced at Continental level since 2009, barring this year when W52-FC Porto raced at Pro Continental level. He has won overall titles at the Vuelta Asturias (2017) and Grande Premio de Portugal (2018), along with stages at the Vuelta Asturias (2017) and Vuelta Ciclista Comunidad de Madrid (2017).

Alarcón's only UCI-classified victory pre-2017 was a stage of the 2013 Volta a Portugal.