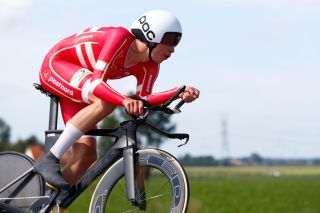 Denmark’s Johan Price-Pejtersen races to victory in the under-23 men’s time trial at the 2019 UEC Road European Championships in Alkmaar, in the Netherlands (Image credit: Getty Images Sport)

The under-23 men's European time trial champion, Johan Price-Pejtersen, will join Norwegian ProTeam outfit Uno-X on a two-and-a-half-year contract from August 1. The Danish rider will make the mid-season move from Danish Continental team ColoQuick, from where a number of riders have moved to Uno-X in recent years.

"It's great, but I also feel as though it's a natural step for me in terms of where I am now and what I want," Price-Pejtersen told Danish cycling website Feltet.dk on Monday. "It's a really cool opportunity, and it feels completely right."

Price-Pejtersen, who is also the current under-23 Danish time trial champion, beat compatriot Mikkel Bjerg to win the U23 time trial at the UEC Road European Championships in Alkmaar, in the Netherlands, last August. He was therefore one of the big favourites for the U23 time trial at the World Championships held in Yorkshire, in the UK, in September, but a crash on what was a very wet course put paid to his chances, and he finished 59th in the race, which was won by Bjerg.

"Time trials are what I'm best at, so it makes sense that I should work on that discipline to improve further," Price-Pejtersen said, "but I'd also like to try to be a more complete rider, and work on things that I'm less good at, so that I'm more useful than a rider who's only good at time trialling."

He joins five other Danes on the team, including current under-23 road race national champion Frederik Rodenberg – all of whom came to the team via ColoQuick.

"It's a huge plus, and something that makes my move even better. It means that I'm not starting out without any relationships on the team; these are riders that I know really well and have raced a lot alongside already. They were a really big part of the ColoQuick squad that I was a part of last year, so I'm obviously really looking forward to riding with them again," said Price-Pejtersen.

"We're really proud that another rider is moving up from ColoQuick," said senior sports director Brian Petersen on the ColoQuick team's website, "and we wish Johan the very best of luck in his future career.

"As a talent-development team, we're of course very happy  that we can consistently nurture riders who are of interest to teams at a higher level," he said.