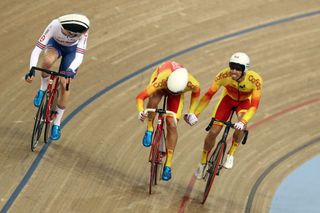 Spain's Sebastián Mora and Albert Torres compete in the Madison at the 2018 Track World Cup in London, in the UK (Image credit: Getty Images)

Spanish track specialists Sebastián Mora and Albert Torres have signed for WorldTour team Movistar for 2020, and will both juggle a road programme with qualification for the track at the Olympic Games in Tokyo, the team has announced.

The pair have already been successful as Madison partners on the track, winning two European Championships in the event, in 2015 and 2016, while Torres won the world title in the Madison with David Muntaner in 2014, and Mora became scratch-race world champion in London in 2016.

On the road, 29-year-old Torres has found success as a decent sprinter, winning the Spanish under-23 road race title back in 2010, while followers of the British domestic scene will remember that he rode for Continental squad Team Raleigh GAC during the 2016 season, and took 11th place at the one-day Rutland-Melton International Cicle Classic that year.

Mora, 31, also raced on the road for Raleigh GAC in both 2016 and 2017, and spent the 2019 season with Spanish Pro Continental team Caja Rural, as well as being part of the Spanish national team that took 10th place in the mixed-relay team time trial at the UCI Road World Championships in Yorkshire, in the UK, in September.

Movistar are happy for both riders to combine their road and track ambitions in 2020, with the pair aiming for Madison success together in Tokyo next summer.