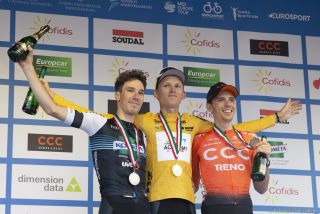 Organisers of the Tour of Hungary have announced five WorldTour teams and six ProTeams that will participate in the event from August 29 to September 2. The 2.1 event overlaps with the first week of the Tour de France but will provide an opportunity for WorldTour riders not participating in the French Grand Tour.

There will be a total of 20 teams at the Tour of Hungary, with WorldTeams confirmed to include Israel Start-Up Nation, the team of the defending champion Krists Neilands, along with Mitchelton-Scott, CCC Team, Trek-Segafredo and Jumbo-Visma.

2020 was supposed to be a big year for Hungarian cycling as it was the original location for the Grande Partenza and the opening three stages of the Giro d'Italia in May. Organisers were forced to cancel the Hungarian stages and postpone the Italian Grand Tour due to COVID-19 coronavirus pandemic. The race has been rescheduled for October 3-25.

The Giro d'Italia had been due to start with an individual time trial in Budapest on Saturday May 9, followed by a stage from Budapest to Gyor and a flat stage from Szekesfehervar to Nagykanizsa before a plane transfer to Sicily.

According to reports in the Hungarian Insider, it wasn't possible to host the opening three stages in Hungary due to a potential second-wave of the coronavirus. The report suggested that organisers had offered to hold the Grande Partenza of the Giro d’Italia in Hungary in May 2021 instead.

Outside of its national championships, Hungry is now set to host just four UCI-sanctioned road races this year; One Belt One Road (August 16-17), Visegrad 4 Kerekparverseny (August 19), Visegrad 4 Juniors (August 26-28) and the Tour of Hungry (August 29-September 2).