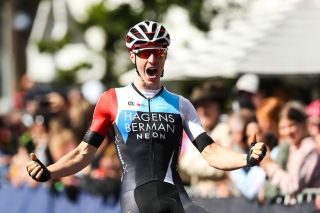 New Australian under-23 road race champion Jarrad Drizners will represent the UniSA-Australia team at the Tour Down Under over the coming week, hoping that his knowledge of the local roads may count in his and his teammates' favour.

Adelaide-born Drizners has signed for the Axel Merckx-managed Hagens Berman Axeon team for 2020, and while he's already ridden to victory in his new colours at the Australian Road Championships in Ballarat, he'll be swapping the blue, black and red of the US-based squad for the white, green, gold and blue of what is effectively a national squad for the upcoming week of racing.

"I had a pretty good weekend last week, and was really happy to come away with the win," Drizners told Cyclingnews in Adelaide on Saturday. "I represented my new team there, but haven't actually raced with them as such – with any teammates.

How to follow the Tour Down Under 2020 – live stream, TV and results

"I'm actually leaving the morning after the Tour Down Under finishes for a Hagens Berman Axeon training camp in California, so I'll meet everyone over there and get things going for the 2020 season, and then the Tour of Oman's going to be the first race for us," he said.

"With the UniSA-Australia team here, though, we've got a few good sprinters in Sam Welsford, Cam Scott and Kell O'Brien for the Schwalbe Classic on Sunday and for the sprints during the week, and I think we'll mainly be trying to ride for Sam on Sunday.

"I'm a local boy, so it's my home tour, and it's going to be a pretty exciting week, I think," Drizners continued. "I'm hoping for a decent stage in Stirling [stage 2 on Wednesday], in particular. I know the roads around there pretty well, which might be an advantage. It's been cool doing recon rides in the past few days and going, 'Yeah – I know the lefts and rights and ups and downs around here.'

"I think that finish sort of suits me, but it's a whole new level being at a WorldTour race, so I don't have too many expectations."

The UniSA team has a reputation at the Tour Down Under of racing hard, and animating the race by getting into breakaways, and even won the race outright thanks to Patrick Jonker in 2004.

"A lot of the guys will definitely be keen to get into the breakaways, and we'll be going for some of the stages in the sprints, and some of those tricky little finishes could suit us as well," said Drizners. "We've got a pretty versatile team here, and I think all the boys are looking forward to it."

It'll be the 20-year-old's first time riding at WorldTour level, but he appears to be more excited than apprehensive.

"I've done a few training rides on the local bunch rides with a few pros who were out last week – guys like Rohan Dennis [Team Ineos] and Miles Scotson [Groupama-FDJ]. But I'm looking forward to getting into it, and am just hoping for a good week, with lots of learning at this new level, so we'll see what we can get out of it. It's going to be a good experience."