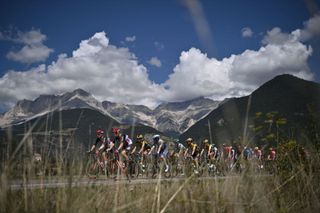 The 2020 Tour de France was already like no other, but it became even more exceptional on Wednesday, as a road stage went by without a single breakaway, an event that has been greeted with bafflement and despair in some corners.

Across the 183 kilometres from Gap to Privas on stage 5, not a single rider spent any longer than a kilometre off the front of the peloton. Barring the briefest of acceleration from Kasper Asgreen (Deceuninck-QuickStep), himself riding for race leader Julian Alaphilippe, no one showed the slightest interest in heading up the road on a snoozy day that was sandwiched in between two mountain stages.

It’s unclear if this was entirely unprecedented, but no one could think of an example beyond times when the peloton has itself neutralised a stage in protest or in honour of a deceased rider.

The lack of a breakaway sparked debate among riders past and present, with a particularly animated Yoann Offredo appearing almost offended in the France Télévisions studio.

"It was an opportunity to spend four hours on television. Cycling is marketing. We had no racing for more than three months – you have to be up for the fight," he said.

"They can say ‘ah, we have a hard stage tomorrow’, or ‘we had a tough weekend’, but it’s the Tour de France! It’s the biggest race in the world!"

Offredo, whose Circus-Wanty Gobert team weren’t invited to the Tour de France this year, is a well-known baroudeur who famously attacked alone some 200 kilometres from the finish on the 2018 Tour. That day he spoke of honouring the race, and he echoed the sentiment again on Wednesday, referring to Jérôme Cousin’s exploits on stage 3, when the Total Direct Energie rider was abandoned by his two breakaway companions but ploughed on alone for more than 100km.

"Jérôme put it well when he said 'out of respect for the Tour de France, I didn’t sit up'."

Offredo’s views, however, weren’t universally shared. Over on Eurosport, former pro Bernhard Eisel saw no reason to complain about the lack of a break.

"They were not going slow, the average speed was 42km/h, it wasn’t a protest or anything. The riders just didn’t see any sense in sending someone up in the breakaway," he argued, despite CCC's Simon Geschke claims he could have ridden the first 120km in jeans and a t-shirt.

"There is no rule to say there has to be a breakaway in a bike race," Eisel continued. "This is a professional sport. The riders wear funny clothes but this is not a circus. I fully defend the riders. They used common sense. Why go in a break knowing they were going to get caught anyway?”

In the end, the stage was won by Wout Van Aert (Jumbo-Visma), who, despite acknowledging the difficulty of the opening stages and the unsuitability of stage 5 to a successful escape, still struggled to get his head around the situation.

"It was really surprising for me. I'm not that long in the WorldTour but since I raced on this level it was actually the first day ever like we did now. Nobody was even interested in it," he said.

"It was quite weird because the bunch always takes the speed of the leaders so even if you're in the breakaway you don't have to kill yourself completely actually, but you get free attention. I understand for teams like us we try to save as much energy as possible because we have a lot of hard work coming up probably. We have a big goal for the GC but there should be a lot of teams that are interested in showing themselves."

Back in the France Télévisions studio, the point was made that even the smaller teams in this year's Tour have ambitions beyond air-time. B&B Hotels-Vital Concept and Total Direct Energie have sprinters in Bryan Coquard and Niccolo Bonifazio, while Arkéa-Samsic have a yellow jersey contender in Nairo Quintana.

Still, that wasn't good enough for Offredo, who, having to sit out this Tour, finished his impassioned argument by urging riders to seize the day.

"I finished the Tour in a pitiful state last year. Ok, it’s because I’m not a big champion but it’s also because I said to myself that I was going to take all the opportunities that came my way. When you finish the Tour, there’s a satisfaction in knowing you took every opportunity," he said.