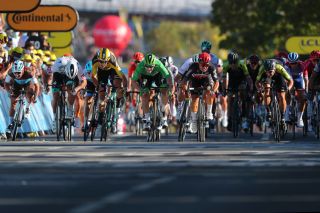 "It was very, very hectic. I  was really close to the front with three and then one kilometre to go, I was more forward than I wanted to be, especially with a headwind finish. I dropped back into the bunch but from there it was quite crazy.

"I knew from the first stage that I won that I had to stay calm and wait for the right time and right gap to open it in the end.

"I had a real desire to win today after yesterday. I was quite disappointed with that sprint. I’m happy to repay my teammates with the win.

"I didn’t really know I’d won, I saluted just in case. I did a big throw and you’re basically looking down at the ground, so you don't see if you won or not. Sometimes you can feel it and I felt quite close.

"I’m super happy with two stage wins; one takes the pressure off and after the first one, you want a second. Now I want another, especially in Paris. I hope to get through the mountains all right and have another sprint in Paris." (Lotto Soudal)

"I don’t really know what happened, it was so hectic. But the team did a fantastic job all day looking after me.

"It was hard to make the switch from following a teammate to going alone and I found myself too far forward too early. Then I was trying to drift back but it was a bit late to drift back. Then they came at speed and it was a complete mess. I tried to limit my losses and get the best result I could.

"A big part of sprinting is bumping shoulders and rubbing shoulders. I have to see it, I really don’t know what happened but when did sprinting get soft?

"When Pöstlberger attacked, my two teammates went and I let the wheel go. When I had a gap, they’re two big engines, so I was shouting on the radio to go, go, because the chances of catching them in that final was difficult.

"Pöstlberger’s attack didn’t affect us at all. What was he going to do? In the end it affected everyone else’s train because we didn’t have to chase. They’re just burning matches." (Deceuninck-QuickStep)

"I saw a stage where we had nothing to play for. We don’t have a sprinter and we don’t have the GC to think about anymore. Yesterday Stefan [Kung] went in the break, and today I had a go.

"I was hoping some other guys would come with me but I found myself all alone. I rode. The wind was against me but I tried to do my best and I enjoyed myself all the same. I think it’s the only breakaway I’ve done on my own, so I made the most of it."(France Télévisions)

“When you are wearing the yellow jersey you cannot afford to sleep or to make any mistakes. It is about focussing for every kilometre.

"The stage was easier than yesterday, but on these roads and with the crash at the end, it was hard, but the team did, again, a great job. Wout van Aert is exceptional, and so is everyone [on Jumbo-Visma], who do their part, it’s why we have the jersey.

"If you start to think or worry too much a lot of things can happen. I don’t [worry too much] and the thing is, we all need to focus on our jobs every day, and we are doing well, so let’s keep doing that.” (Flobikes)

"In the sprint, Peter [Sagan] was in a good position but then was a little blocked. Then in the last metres, he saw a possibility to go on the barrier to try to win the stage and he touched [Wout] van Aert harder than he liked to do it. In the end, he was relegated and that’s far away from perfect but we have to accept that." (Bora-Hansgrohe)

"Today, I had the speed and, in the sprint, I tried to go on the right side. I passed one rider easily, but then it got really narrow. I had to move to avoid the barriers and as a result, I got relegated.

"This cost me a lot of points but I still have not abandoned the fight for the Green jersey." (Bora-Hansgrohe)

Lukas Pöstlberger (Bora-Hansgrohe), attacked with 10km to go on stage 11

"I wanted to put some pressure on the others, with the climb, but if everyone was fresh after an easy day, it was always going to be hard. I wanted to try because I might have been able to win, or if not Peter [Sagan] would have a better chance.

"I knew [Kasper] Asgreen and [Bob] Jungels would pull. Bob is strong on the climbs and I knew Asgreen would pull until the climb and then Jungels would attack. I was able to stay in the wheel but the peloton came back.