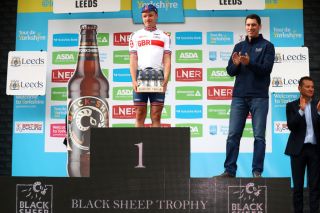 Highly-rated British youngster Ethan Hayter will turn professional on the road in 2020, signing for Team Ineos.

The 21-year-old, already a world champion on the track, impressed as a stagiaire for the British team in the latter part of 2018 and will now join on a three-year professional contract.

Hayter won gold with the British Team Pursuit squad at the Track Worlds last year, where Ed Clancy described him as 'the next Bradley Wiggins'. He went on to add more track medals at the European Championships, Commonwealth Games, and at this year’s Worlds, while also impressing on the road, with stage victories at the U23 Giro d’Italia and Tour de l’Avenir in 2019.

Hayter will continue to combine road and track in his first season with Ineos, splitting the year in two. The first half will be about building up to the Tokyo Olympics in July, where he’s targeting gold medals in the Omnium, Team Pursuit, and Madison, before the focus switches to the road.

"This team has lots of riders for me to take inspiration from and there’s so much young talent in the team as this season has shown. As well as Egan [Bernal], Pavel [Sivakov] and Tao [Geoghegan Hart] receiving chances at the Grand Tours, there are other young riders such as Chris Lawless – who was someone I was racing against at under 23 level not long ago – winning Tour de Yorkshire, so there’s plenty of different paths to follow."

Hayter rode four races while riding as a stagiaire for Ineos – then Team Sky – in 2018, all one-day events in Italy. Two of them – the Coppa Agostoni and Coppa Sabatini – were won by teammate Gianni Moscon.

In that period, he was even more impressive in the colours of the British national team, recording four top-10 finishes at the Tour of Britain – notably fourth behind Julian Alaphilippe in Bristol – before placing 5th and 8th, respectively, in the U23 time trial and road race at the World Championships.

This year, after winning silver and bronze medals at Track Worlds, Hayter has impressed on the road, winning A Travers Les Hauts de France, the prologue and opening road stage of the U23 Giro d'Italia, and a stage of the Tour de l'Avenir. However, he crashed out of the prestigious French race with a broken collarbone and was forced to miss the World Championships in Yorkshire.

"The Baby Giro and Tour de l’Avenir are the biggest races at Under-23 level and I won stages in both of them so that was a massive confidence boost heading into the new season," Hayter said.

"At the Baby Giro I was sixth on one of the mountain stages so I was right up there on the climbs and the sprints, so I will have to discover which type of race suits me best. It means I can look at most race profiles and still have a go."

Hayter's arrival continues a concerted investment in youth in the past few years. Since the 2016-17 transfer window, the average age of recruits is just over 23, with 14 of the 22 aged 23 or under.

"Ethan is an exciting, young rider who has already had significant success at a more junior level. His signing is a further commitment to our long term-future as Team Ineos," said team manager Dave Brailsford.

"We now have a really exciting group of young riders who all have the chance to compete and train with more senior and experienced teammates – and who can learn from them what it takes to win. Ethan is at a key stage of his professional development and we are all excited about what lies ahead for him as part of the team."