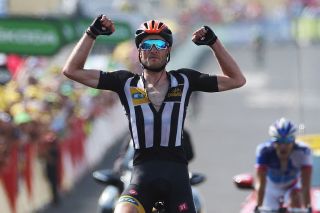 Steve Cummings is set to hang up his wheels at the age of 38. According to journalist Ned Boulting, the British rider will retire. He was not named as part of NTT's 2020 roster when the team announced its completed line up last week.

Cummings turned professional on the road in 2005 with Landbouwkrediet-Colnago, transitioning from the track where he earned a silver medal in the team pursuit at the 2004 Olympic Games in Athens. He continued to mix the two disciplines until joining the WorldTour (then ProTour) with the Discovery Channel team in 2007.

Cummmings did not follow the team as it merged with the Astana outfit in 2008, instead dropping back to the Pro Continental level with Barloworld, with whom he took his first pro wins in the Giro della Provincia di reggio Calabria and Coppa Bernocchi.

In 2010, after the South African team folded, Cummings joined teammates Geraint Thomas and Chris Froome in moving across to the nascent Team Sky and spent two seasons with the team before moving on to the BMC Racing Team.

The working class hero: Through the years with Stephen Cummings

Cummings celebrates a big day out at the Tour de France

Cummings enjoyed ample success in his three years with the American team, taking his first Grand Tour stage in the 2012 Vuelta a Espana in addition to stage wins in Tirreno-Adriatico, Tour of Beijing, Tour de Pologne, Tour of Britain and Tour Méditerranéen.

He moved to MTN-Qhubeka in 2015 and won his first Tour de France stage in Mende - a huge result for the South African team on Nelson Mandela day - when he outfoxed Romain Bardet and Thibaut Pinot on the steep uphill finale.

Cummings soloed to his second Tour de France stage win the next year after the team was renamed Dimension Data, escaping to take stage 7 to Lac de Payolle from the breakaway. In 2016, he also won a stage of the Criterium du Dauphiné, Tirreno-Adriatico and Vuelta al Pais Vasco.

He was nearly denied selection for the Olympic Games in Rio but was a late addition to the British team after Pete Kennaugh had to drop out. He returned from Rio to win the overall Tour of Britain. In 2017, Cummings won both the road race and time trial British championship titles.

However, his last season was marred by injury: he suffered a broken collarbone in a crash during Pais Vasco, and a broken vertebra in the Tour of Britain ended his season