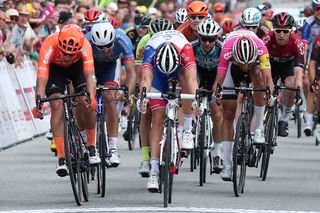 After the Belgian town of Ath pulled out of hosting the finish of the opening stage of next month's Tour de Wallonie earlier this week, nearby town Tubize has also chosen not to host the start of stage 2, citing similar coronavirus safety concerns.

On Tuesday, the mayor of Ath, Bruno Lefebvre, announced that he had to "protect my people", and that the town would not host the finish of stage 1 on August 16. On Wednesday, the city council of Tubize – approximately 25 kilometres east of Ath – followed suit, sending out a press release to explain its reasons for not being able to welcome the race for the start of the second stage on August 17.

"Before the onset of the health crisis, the municipal council accepted the organisation of the start of this stage. We believe it was an opportunity to organise a nice folk festival in honour of cycling," read the release, according to Sporza.

"It also had a lot of symbolic value, as the Belgian cycling federation (KBWB) established itself in our city not so long ago," it said.

"But the corona crisis now no longer allows us to organise such an event, in accordance with the ministerial decision of June 30 and the measures taken to prevent the spread of the coronavirus," added the statement, referring to the Belgian government measures that took effect from July 1, whereby initially 400 people are permitted to attend outside sporting events, rising to 800 from August 1, as things currently stand.

"Many measures have been relaxed during this period, but we must be on our guard. The figures on the evolution of the pandemic show this. Our task is to ensure the safety of our population, so that's why we've decided to cancel the start of the second stage in Tubize," the statement concluded.

The Tour de Wallonie organisers had been working hard to secure a replacement for Ath for the finish of the opening day, and have now been forced to also look for an alternative to Tubize for the start of stage 2.

The stage race was originally set to run from July 27-31, but its rescheduled dates of August 16-19 – a day shorter than it would normally be – have given it extra appeal as a build-up event to the Tour de France (August 29-September 20). According to Sporza, riders including Lotto Soudal's Philippe Gilbert, Caleb Ewan and Thomas De Gendt, as well as Greg Van Avermaet (CCC Team) and Oliver Naesen (AG2R La Mondiale), are set to line up in Soignies in a month's time.