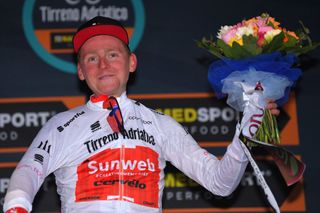 Sam Ooomen has signed a three-year contract with Jumbo-Visma, a move that signals the end of his time at Team Sunweb.

The 25-year-old came through the ranks at Team Sunweb and signed with them at the start of 2016. He raced the Giro d’Italia twice and th Vuelta a Espana once, claiming a top-ten finish in his maiden  Giro in 2018.

However, he has endured persistent injuries in the last 18 months and raced only 31 days in 2019. He would eventually call time on his season in June of last year due to an iliac artery problem that required surgery.

Earlier this year, when rumours of a switch to Jumbo Visma first surfaced, Sunweb began to inform the media that the rider would not be offered a contract extension at their team, and on Tuesday the move became official.

“I had five good and joyful years at Team Sunweb. Thinking about my future, it feels like the right moment to move on,” Oomen said in a press release issued by his future team.

“It’s great that I can take this new step at Team Jumbo-Visma. The knowledge, the philosophy, the love for the sport and the trust I feel in this team have convinced me that Team Jumbo-Visma is the right team for me. I am really looking forward to working in a new environment, with many new faces but also with some old acquaintances. I’m really happy with that”, Oomen added.

Jumbo Visma have been tracking Oomen’s progress for many years, having witnessed him develop first hand while at the U3 Rabobank team.

The rider follows the path set by Tom Dumoulin, who left Sunweb for Jumbo Visma at the end of 2019. The arrival of Oomen also provides cover after Laurens de Plus signed for Team Ineos – although that move has not yet been formally announced.

“Sam is the biggest young Dutch stage race talent," said team directeur sportif Merijn Zeeman. "We followed him for several years with great interest. We are very happy that he has now chosen us.

"We are convinced that, with the right guidance, Sam can become even better. We want to gradually guide him towards the world top."