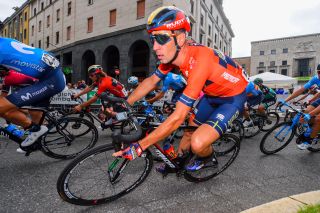 While Primoz Roglic celebrated Jumbo-Visma's 50th victory of the season at the Tre Valli Varesine race, many of his biggest rivals could only try to temper their anger and laugh off the farcical finale after following a television motorbike off course on a fast descent and losing any chance of success.

Roglic won with a perfectly timed solo attack in the final kilometre. It was a well-taken victory, but he admitted he had been lucky.

The race seemed to have slipped Jumbo-Visma's grasp, then suddenly all the big names missed a sharp right turn at 65km/h on a descent and rode out of contention. The peloton caught lone attacker Luis Leon Sanchez (Astana), and Roglic took advantage of Team Ineos' hard work with his solo surge.

"Let's say we did an extra loop down to the lake…," Nibali said, ironically, after preferring to climb off in the final kilometre and head to his Bahrain-Merida team bus instead of finishing the race.

Bauke Mollema (Trek-Segafredo) applauded bemusedly as he crossed the line, but not everyone was amused about missing out on a chance of victory.

Several hours before the race, Dan Martin had highlighted the road book information on social media as 'Quite possibly the most useless double page spread in a road book ever', not knowing his tweet would come back to bite him.

"If the organisers take you the wrong way, there's not much you can do," Martin told Cyclingnews after the race, angry and frustrated by what happened. "It's a pity, because it was a strong group, with all the best riders in the race.

"When you overcomplicate the circuit like that, it becomes a criterium. And I don’t think a pro race should become a criterium," he said.

"Nobody really knew where we were going, and we were going at 65km/h when it happened. We quickly knew we'd gone wrong, but what can you do? You have to take it steady so you don’t get hit from behind and then it takes time to turn around. We knew we'd lost any chance of winning."

After a post-race shower, Nibali was able to see the funny side to the mess-up. He was happy to head home for a few days before ending his season at Il Lombardia on Saturday.

"Unfortunately, things like this can happen, but it was a real pity," he said. "The
speed was high, the TV moto went straight on, and there wasn't anything indicating the corner route.

"I know these roads a little, and when we straight on I thought we'd gone the wrong way. But the TV moto was convinced it was the right way and kept going. But it was the wrong way and we almost reached the lake…

"It's a pity," he said again. "Tre Valli Varesine has always been a nice race, but they've started playing with the route and that can fool you."