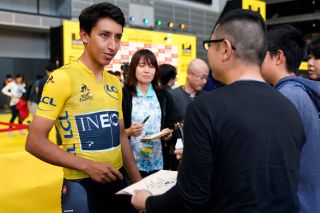 Egan Bernal believes his reputation has been damaged by a spate of recent doping cases in Colombia, but insists his home country is “improving” when it comes to the fight for clean cycling.

Bernal hit the headlines in Colombia a couple of weeks ago when comments made in an interview with French newspaper Le Monde were read as a criticism of the Colombian Cycling Federation and its anti-doping efforts.

“I would be unable to say if it was one or 100,” Bernal replied when asked how many times he’d been tested in Colombia this year. When it was suggested it would be closer to 100, he said: “I don’t have the figure in my head.”

In Colombia, Bernal was widely quoted as saying: “I can’t say if it was one or 100, but it must be closer to one,” which the journalist from Le Monde has attributed to a mistranslation from one publication.

Speaking to Cyclingnews last week, Bernal regretted the controversy that has been caused, and insisted his words had been taken out of context.

The past decade has seen a wave of Colombian success on the world stage, with Bernal becoming the first Colombian to win the Tour de France this year, but the country has also grappled with the issue of doping. Twenty Colombians are currently banned or provisionally suspended – more than any other nation – and Colombia’s anti-doping laboratory remains closed, having been discredited by the World Anti-Doping Agency in February 2017.

This year has seen Tour de France stage winner Jarlinson Pantano test positive for EPO, while Manzana Postobon, a team with a vocal anti-doping stance, folded in May after Wilmar Paredes tested positive for EPO and Juan Jose Amador for Boldenone. Alexis Camacho and former Tinkoff-Saxo rider Edward Beltran were the latest to go positive on the domestic circuit last month. Two years ago, the country’s flagship race was marred by a spate of eight positive tests for CERA.

“It’s difficult for us. Our image, as Colombians in general, is being affected by what has happened,” Bernal told Cyclingnews.

However, the 22-year-old Team Ineos rider insisted that the country is moving in the right direction and that the national cycling federation is doing all it can to combat doping.

“It’s improving, it’s improving. There are still doping cases and positive tests, but not just in Colombia – in a lot of other places, too,” Bernal told Cyclingnews.

“If positives are coming out in Colombia, it’s because they’re carrying out anti-doping tests. What more can the federation do? It simply has to carry on testing and riders need to become more aware.

Bernal pointed out the financial constraints facing the Colombian authorities, arguing the funds invested at governmental level cannot match Europe’s major cycling and sporting nations. Responding to the stir caused by Bernal’s comments in Le Monde, Mauricio Vargas, the new president of the Colombian Cycling Federation, claimed $300m has been spent on sending samples to the US and Canada since the closure of the laboratory.

“You have to understand that this is Colombia. It’s not a third-world country, but we don’t have the budget of a country like France, Spain or Italy. You cannot compare them,” Bernal said.

“Maybe it’s a federation that’s rich in terms of the quality of riders, but testing costs a lot of money. I think they’re doing what they can with the budget they have.”

Bernal also highlighted the difference between Europe-based WorldTour professionals like him and the riders who compete on the domestic circuit in Colombia and South America. He and his peers are tested more regularly by virtue of living, training and racing at a higher level in Europe, while also being part of the biological passport programme.

“It might be little different for us, because we are tested more in Europe, but still, in Colombia there is testing,” Bernal said.

“It’s normal that the winner of the Tour de France is tested more than your average rider in Colombia. The federation cannot test every rider every day, but I think they’re doing a good job with the resources they have.