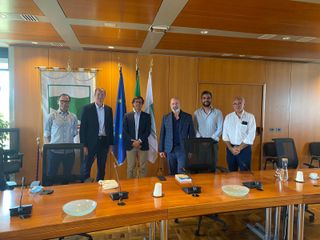 Tour de France race director Christian Prudhomme was in Italy on Wednesday to discuss the possibility of a future edition of the race, possibly in 2023, starting in Bologna and then visiting Florence and Tuscany.

Pantani was born in Cesenatico on the Romagna coast, while Nencini was born in Barberino di Mugello on the Tuscan side of the Apennines and the opening stages of the race could celebrate both riders and attract millions of local cycling fans.

Tuscany hosted the 2013 UCI Road World Championships and Emilia Romagna hosted the Grande Partenza of the 2019 Giro d'Italia but now they want to use the huge international appeal of the Tour de France to promote the central Italian regions.

The 2021 Tour de France will start in Copenhagen, Denmark, with Saint-Etienne due to host the Grand Départ in 2022, leaving 2023 or 2024 as the most likely date for Emilia-Romagna and Tuscany.

Race organisers ASO expect to earn a fee of several million Euro for awarding the Grand Départ, with local costs raising the budget. Brussels reportedly spent over €11 million to host the 2019 Grand Départ. €5 million was reportedly paid to ASO, with a further €6 million spent on local and region organisation.

Prudhomme met with the Emilia-Romagna president Stefano Bonaccini and the mayor of Florence Dario Nardella, their sport officials and the Emilia-Romagna Tourism agency president Davide Cassani, who is a former professional rider and the current Italian national team manager.

Both Emilia Romagna and Tuscany have been hit by the impact of the COVID-19 pandemic but not as badly as Lombardy in the north. The most serious impact is a major loss of international tourism, hence the need to promote the regions and their capitals Florence and Bologna.

"Another step forward has been made towards having the start of the Tour in Emilia-Romagna and Florence," a joint statement from the two Italian areas said.

"There's a shared desire to advance the project and create a historic moment, because the French race has never started from Italy. The idea is to promote 'Made in Italy' products thanks to the regions involved and so highlight our culture, art, countryside, fashion, food and traditions."