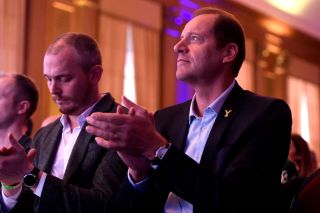 Tour de France director Christian Prudhomme has hailed the new rescheduled 2020 calendar as a success for cycling, claiming that the key stakeholders put their differences aside and have spoken "with one voice".

While the new dates for the Tour de France – August 29-September 20 – were confirmed three weeks ago, on Tuesday the UCI revealed the full schedule for the rest of the condensed season.

As well as the Tour de France, the Amaury Sport Organisation also help run the Vuelta a España, which has been reduced to 18 stages and will take place from October 20 to November 8, overlapping with the Giro d’Italia. Similarly, the Critérium du Dauphiné, pushed back to August to remain a preparation race for the Tour, has been reduced to five stages.

Liège-Bastogne-Liège and Paris-Roubaix also overlap with the Giro, on October 4 and 25 respectively, while the other ASO-run one-day race, La Flèche Wallonne, takes place on September 30.

"What pleases me is that cycling has spoken with one voice in order to build a calendar for those three and a half months," Prudhomme told French newspaper L’Equipe.

"Naturally, there were discussions between us, the organisers, and representatives of teams and riders. We had numerous meetings, all constructive. We worked in a spirit of cooperation – excellent news – in order to pull off an exceptional calendar constructed in exceptional circumstances.

"Usually, we are anti-overlap, but here, it’s completely different. Marc Madiot said we need as many races as possible for as many riders as possible. Teams will, at times, be racing on three fronts. It’s a chance to be everywhere, and that’s important for the teams and the riders."

Despite the spirit of unity, Prudhomme did acknowledge that the Tour de France was given preferential treatment, and the rest of the calendar made to fit around it.

The French Grand Tour dwarfs every other race when it comes to its global reach and publicity potential for sponsors, and while some complain that ASO keeps too much of that income and power to itself, there seems to have been an understanding that the Tour is crucial to weathering the COVID-19 pandemic.

"The Tour de France set its dates, everyone recognised that it was the priority, and the calendar was constructed around that anchoring point, respecting the health regulations in each country. The arbiter is the UCI, who made the final call," Prudhomme said.

"There was a common will to find solutions in order to hold as many races as possible in a short time frame, with the consensus being ‘let’s unite to propose a calendar’. There are always differences, of course, but the world of cycling has stepped forward together, and that’s what has pleased me."

Adapting to the health situation

Prudhomme struck a celebratory tone in discussing the new calendar but did concede that it remains provisional, aware that the pandemic could develop in a number of ways between now and August.

"The most important thing is the health situation, but it’s about perspectives. It’s the right to hope for the riders, which is absolutely essential. It’s an objective for everyone, simply. But it is all, in effect, conditional on the health situation in France and other countries," he told Le Figaro.

Prudhomme previously insisted the Tour de France would not be held 'behind closed doors', but seemed to soften to the idea of limiting public attendance on Tuesday.

French officials have indicated there will be no large-scale sporting events before September, meaning the Tour, which gets underway in Nice on August 29, may have to impose restrictions for some or all of the race.

"It will evidently be in line with the regulations in place at that moment," said Prudhomme, suggesting he is indeed prepared to repeat the measures imposed at Paris-Nice in March.

"We have already been confronted with that situation recently, at Paris-Nice. There was a limit [on public gatherings] of 5,000 people the first day, then 1,000, then 100, and we adapted to all that," he said.

"We will evidently respect the authorities. We’re having numerous meetings with the sports ministry, with different commissions or working groups set up by the UCI."

Finally, Prudhomme confirmed that there will still be 22 teams on the Tour de France start line, as reported by Cyclingnews, despite hopes from the likes of Mathieu van der Poel's Alpecin-Fenix that extra spots could be opened up.

However, the Dauphiné will have 23 teams, as ASO has invited French squad Total Direct Energie, who had originally opted to line out at the now-cancelled Tour de Suisse.