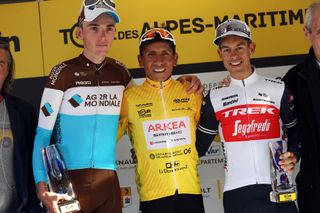 Trek-Segafredo's Richie Porte continued what has already been a successful season so far with third place overall at the Tour des Alpes-Maritimes et du Var on Sunday. The 35-year-old climber began his season with a stage win and overall victory at the Tour Down Under in South Australia in January, and this weekend's three-day French stage race marked the start of his European campaign, which continues with Paris-Nice in early March.

Porte kept pace with race leader Nairo Quintana (Arkéa-Samsic) on the final stage to Mont Faron on Sunday, elevating him from 14th place after stage 2 – which had been won by Quintana – to the podium, eventually finishing 40 seconds behind the Colombian and on the same time as second-placed Romain Bardet (AG2R La Mondiale).

While Quintana was already winning in Europe at last week's Tour de la Provence, Porte and Bardet were both only kicking off their European seasons at the Tour des Alpes Maritimes et du Var, having both started 2020 with rides at the Tour Down Under, where Porte topped the general classification and Bardet took 38th overall as part of a more low-key start to the year.

"I didn't really know what to expect since I didn't have the best feelings with my legs today," admitted Porte, "so to be able to go with Quintana and Bardet and finish third on the GC was nice."

It was a doubly successful day for Trek-Segafredo in that Julien Bernard won the final stage to the top of Mont Faron, which was the Frenchman's first pro victory.

"Our goal was to win a stage and finish on the final podium, and today we did that," continued Porte. "It was incredible to see Julien win – he's always a guy that does his job for the team. But all the guys were fantastic these last three days, and it was a nice race for me to come back to Europe to, and start in a positive way.

"I'm now looking forward to Paris-Nice in two weeks' time," added the two-time winner of the race, who took the title in 2013, ahead of the now-retired Andrew Talansky, and in 2015, when he beat Michal Kwiatkowski.