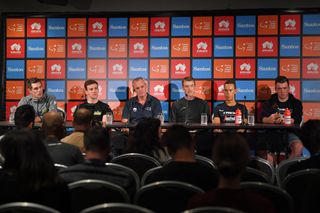 The main favourites line up to meet the press ahead of the 2020 Tour Down Under (Image credit: Getty Images)

The favourites for this year's Tour Down Under gathered for a pre-race press conference at the Hilton hotel in central Adelaide on Monday, with Mitchelton-Scott's Daryl Impey and Simon Yates clearly determined to try to win yet again, with time trial world champion Rohan Dennis (Team Ineos) and Richie Porte (Trek-Segafredo) appearing ready to dethrone them.

This year's opening WorldTour event is being billed as one of the toughest-ever editions of the race, with a tough uphill finish to stage 3 at Paracombe on Thursday and the stage 6 finale to Willunga Hill on Sunday the two stages most likely to help decide this year's overall classification.

Between them, Porte, Dennis and Impey have won four of the last five editions of the race, with the latter now looking to make it three wins in a row in 2020.

"No doubt, it's one of my favourite races on the calendar, and it's an important race for the team, too," said defending champion Impey, whose Australian Mitchelton-Scott team attaches a lot of importance to trying to win a race it's come out on top at on five of the last eight occasions.

Richie Porte takes aim at 'climber-friendly' Tour Down Under

"This year, there are some new riders here, with new ambitions, and I think a lot of teams have looked at using a different strategy," said Impey.

"With Paracombe featuring on the race again, that also changes things up. I'd love to do the hat-trick, and I'm ready for it and have prepared well, and that's all I can do.

"I think last year I stepped up again, especially on Willunga – I improved there – so who knows this year? Maybe things will go better or maybe they'll go worse. But, that being said, there are new challenges, and that's what keeps this race exciting."

His Mitchelton-Scott teammate Simon Yates, has come to the Australian race for the first time and seems ready to step into a leadership role should this year's course turn out to be too tough for Impey.

"I'm excited to start racing," said the British climber, who won the Vuelta a España in 2018 and will target the Giro d'Italia in 2020.

"I think we've got a team here that can really take the race on, either with me or 'Imps', and, yeah, I've not raced for four or five months now, so I don't know how I'll go. Training's gone well, but it's always different to racing, so we'll have to see when we get out there."

2017 winner Richie Porte has finished as the runner-up to Impey for the last two years, but will be doing everything he can to take a second overall win at this year's race.

"My biggest challenger could be any one of the riders sat here, but there's also George Bennett [Jumbo-Visma] and countless other guys – and there's always a surprise package at this race," Porte warned.

Asked whether he'd like to take a seventh-straight victory on Willunga Hill, Porte unsurprisingly said that he would.

"But it's easier said than done," he added. "Of course, I'll give it my best shake, but I think everybody here's going to be trying to do the same.

"I've trained well, and have a super team here, so I've done everything I can to control where I'm at, and I'm looking forward to starting the race."

One of the members of Porte's seven-man Trek-Segafredo squad is new road race world champion Mads Pedersen, who made it clear that he had only one job at this year's race, denying that he'd be looking for opportunities to win stages.

"I'm here for the next week to help Richie out," said the 24-year-old Danish rider, "so that's what I have to do."

Rohan Dennis said that he believed he was a different kind of rider when he won the 2015 edition of the race, and is this year looking forward to racing with, and getting to know, his new Team Ineos teammates.

"In 2015, I came here having done a lot of track work in preparation for the Hour Record," he explained, having gone on to set what was then a new record of 52.491km in Grenchen, Switzerland, less than a month after winning his home race.

"It had made me a lot more explosive, which helped me to beat Richie that year, that's for sure," he said, remembering his two-second victory over Porte, who was then riding for Team Sky.

"This year, I'll be getting to know how the team works in a race situation, which is something I have to get used to for this race and for the future," adding that the cooler conditions forecast for this year's race should make for better racing.

"I'd rather be racing in the mid-20s or low-30s. It's nice, and still warm as well, and I think when you're getting over 35°C and into the 40s, it's not nice for anybody. I don't think anyone really enjoys it, and it affects the race as well. But the weather we've got coming is, I think, perfect for the race."

Turtur's last race despite the bushfires

Race director Mike Turtur, who'll pass his race over to former professional rider Stuart O'Grady for 2021 after 22 years at the helm, has often been questioned over the wisdom of holding a stage race at what is normally the hottest time of the South Australian summer, and reiterated again the reasons behind the Tour Down Under's calendar slot.

"I think we're about to stage the coolest race in our history," said Turtur responding to a question about climate change. "But the race is in January because it's holiday time and it's a tourism event.

"I think it works really well for us: we enjoy being the first race of the year, seeing the new teams, new signings, new bikes, new jerseys and so on, so there are so many things that work in our favour. We have to deal with the heat and the weather the best we can," he said, "but I think January's a good time for us."

Asked about the bushfires that have affected parts of South Australia that are included on this year's route, and which continue to burn in other parts of the country, Turtur was adamant that the race would bring an element of positivity to what has been a tough time for many.

"When we go into the Adelaide Hills, it's going to be important to support the Hills' towns and regions by bringing people back out to the areas that were affected," said Turtur.

"The riders donated their prize list from last night's Schwalbe Classic to the cause, so that was also a great gesture by them. So I think collectively the race is doing what it can to support the regions and we'll do our best to put on a good show and bring a lot of people into the affected areas.

"I think if you look at the overall contenders here, you've got maybe 10 riders with solid chances to win the race," he added, "and we've got a terrific sprint field, too, so we've got the best of both worlds, and maybe the strongest field we've ever had."

The 2020 Tour Down Under starts on Tuesday with a 150km circuit stage around Tanunda.

Cyclingnews will have live coverage of every stage with news, reports, photo galleries and interviews and news from our reporters on the ground in Adelaide.