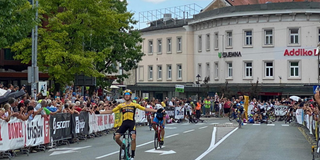 A pole and traffic furniture in the middle of the road just 50 metres from the finish line sparked a crash at the GP Kranj in Slovenia on Sunday, with a number of sprinters and their teammates going down at speed.

The pole was protected with padding but was in the trajectory of the sprinters as they prepared to kick out of the corner.

Several videos posted on social media captured the crash and highlighted the dangers of leaving a pole in the middle of the road.

The crash again highlighted the dangers of poor safety measures at races and the question of who is responsible for ensuring the race route is safe. The incident reminded some of the terrible crash Peter Stetina suffered at the 2015 Vuelta a Pais Vasco. He hit a pole that had been left in the road, leaving him with a broken leg and a thrashed kneecap and ultimately affecting his long-term cycling career.

The peloton staged a protest the day after that crash, with the UCI saying it would open an investigation.

"The Union Cycliste Internationale (UCI) has expressed its concerns to the race organiser," it said at the time.

"Under the UCI Regulations, race organisers are responsible to ensure that all necessary safety measures are taken and clearly the presence of exposed pavement posts in the finish line were unacceptable. The UCI will be investigating the circumstances in which these crashes occurred at the close of the event and upon receiving the commissaires’ report and any other testimonies."