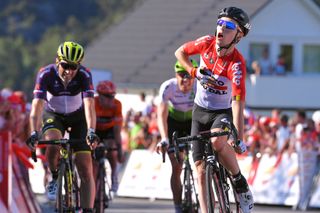 Lotto Soudal's Bjorg Lambrecht takes what would be his first, and sadly only, professional victory on stage 3 of the 2018 Tour des Fjords in Egersund, Norway (Image credit: Getty Images)

A star-shaped plaque, commemorating the life of Lotto Soudal's Bjorg Lambrecht, who died following a crash at the Tour de Pologne in August this year, has been unveiled in the town of Egersund, in Norway, where Lambrecht took the sole professional victory of his career in 2018.

As reported by Het Nieuwsblad, Norwegian pro riders Alexander Kristoff and Sven Erik Bystrøm, both of UAE Team Emirates, and Sunweb's Susanne Andersen were in attendance to help unveil the plaque, which reads: In memory of Bjorg Lambrecht, April 2, 1997 – August 5, 2019, Tour des Fjords stage winner in Egersund on May 24, 2018.

Lambrecht beat Mitchelton-Scott's Michael Albasini and Dimension Data's Edvald Boasson Hagen in the uphill sprint finish to the third and final stage of the race in the town in southwest Norway, although Albasini's second place was enough to give him the overall race title by six seconds from Lambrecht.

The 22-year-old died after crashing on stage 3 of the 2019 Tour de Pologne between Chorzów and Zabrze. He was immediately taken by ambulance to hospital in nearby Rybnik, but was unable to be saved due to the severity of his injuries.

Lambrecht was in only his second season as a professional rider, having joined WorldTour squad Lotto Soudal in 2018 from their under-23 development team. He finished second to 2019 Tour de France winner Egan Bernal at the 2017 Tour de l'Avenir, and fourth at this year's Flèche Wallonne in April, as well as being the best young rider at the Critérium du Dauphiné in June, and was widely touted to become one of Belgium's next climbing stars.

The Tour de Fjords and the Tour of Norway merged ahead of the 2019 season, creating a single six-day stage race, which was won by Kristoff this year. The organisers of the race tweeted that Lambrecht's father, Kurt, said of the plaque: "With this star, Bjorg will eternally shine over Egersund."

In August, Bjorg Lambrecht tragically passed away. To pay him tribute, a memory star will be placed in Egersund where he won his first and only pro race: stage 3 of @TourDesFjords 2018.Tomorrow at 12pm a ceremony will be held in his honor.#ForBjorg | @Lotto_Soudal pic.twitter.com/UGmloZBE6oDecember 3, 2019