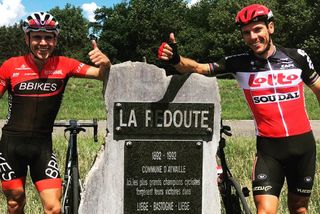 The current trend of 'Everesting' has provided a welcome distraction in recent times, with a lack of racing over the last few months, but on Friday Philippe Gilbert put in an incredible effort to set the record time on the iconic La Redoute climb in Belgium.

During a ride that was being recorded as part of a documentary on Gilbert, the former world champion was challenged by his brother to set the fastest time possible on the climb that features in Liège-Bastogne-Liège, which Gilbert won in 2011.

The Lotto Soudal rider completed the climb, which is 1.6km long with an average gradient of 9.5 percent, in a time of 4:25. There are pitches of 22 per cent on the climb, which Gilbert knows incredibly well as he grew up near the foot of the ascent.

The record was previously held by Romain Bardet (AG2R La Mondiale) who had set a time of 4:42 before Gilbert knocked a whopping 17 seconds off the Frenchman’s time. The Lotto-Soudal rider averaged 20.9 kph.

Former teammate Remco Evenepoel responded to the news on social media, joking that Gilbert had assistance. "Full tailwind for sure," joked the young Deceuninck-QuickStep rider.

Gilbert also challenged his followers on social media to try and beat his La Redoute time.

"Yesterday I had a filming day for my documentary and we spent a day in Belgium . My brother challenged me to take the best time on La Redoute. Try to beat it!" he wrote.

Gilbert, who normally resides in Monaco, will target the Classics and the Tour de France as part of his new-look 2020 racing schedule.

Yesterday I had a filming day for my documentary and we spent a day in 🇧🇪. My brother challenged me to take the best time on La redoute. Try to beat it! 🏆🚵🏼‍♂️ pic.twitter.com/gebgw4Z36tJune 19, 2020