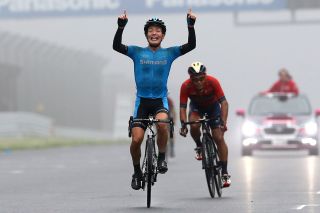 The reigning Japanese road race champion, Shotaro Iribe, has signed for NTT – Dimension Data's new name for next season – the team has announced.

Meintjes keen to restart after season blighted by crashes

Iribe joins having spent the past eight seasons with Japanese Continental outfit Shimano Racing Team, with whom he won the national road race title this season, and stages at the Tour of Thailand and the Tour de Kumano in 2018.

"I'm very happy to be able to join NTT Pro Cycling," said the 30-year-old on the team's website. "This is the challenge that I've been aiming for since I started bike racing. No words can describe how happy I am."

The announcement comes in the same week that the WorldTour team that has so far been known as Dimension Data unveiled its new blue and black kit in Tokyo, Japan, where new title sponsor NTT – the Japanese parent company of Dimension Data – are headquartered.

"It's never easy to challenge at this top level, but I'm determined that I'll be racing for the team by putting all my energy and soul into it. I would like to thank all those who have made this possible," said Iribe.

"At the conclusion of a hugely significant week for our team, we're thrilled to have Shotaro, the Japanese champion, join our team," added NTT Team Principal Doug Ryder. "Our time spent in Tokyo has been hugely fulfilling, and the passion with which we have been embraced has been truly humbling.

"Being a national champion comes with great prestige and responsibility, so to have the Japanese champion compete in the NTT Pro Cycling colours is hugely exciting," he continued.

"Shotaro loves racing, and takes his chances through being opportunistic, and it's a real pleasure to have him as our 10th new signing. We can't wait to get the 2020 season under way," said Ryder.