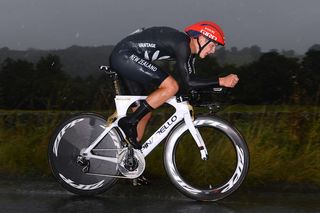 The current New Zealand road race champion, James Fouché, will race the rest of this season as a stagiaire with Australian WorldTour squad Mitchelton-Scott following this week's World Championships in Yorkshire, the team has announced.

Twenty-one-year-old Fouché has ridden the 2019 season with Team Wiggins Le Col, returning from New Zealand at the start of the year – where he won both the national championship road race and the under-23 time trial title – to race a European programme in his second year with the British Continental-level squad.

The all-rounder finished 14th at the under-23 version of Paris-Roubaix in June, and won the mountains classification in his first three stage races this season – at the Tour of Antalya in Turkey, the Volta ao Alentejo in Portugal and at Le Triptyque des Monts et Chateaux in Belgium.

Fouché is currently racing the World Championships in Yorkshire, in the UK, for the New Zealand national team, and placed 44th in the U23 individual time trial on Tuesday. He'll start the U23 road race on Friday ahead of lining up for his first race with Mitchelton-Scott at next week's Tour of Croatia.

"This opportunity means heaps to me," said Fouché on the team's website on Thursday. "I've been wanting to join the pro peloton since I started cycling, and this is a big step towards that. Hopefully I can pick up some learnings from the guys and close the step for the future, so I'm looking forward to it.

"I'm scheduled to line up in a few tough races for the rest of the year, and I hope I can help the guys get a few results," he continued. "I'm always up for doing my job, and whenever the race gets a bit tougher, I like to get involved, so we will see where that takes us, but I just want to do a good job for the team.

"I'd like to show what I'm capable of, and maybe even get an opportunity to go in a breakaway, but I also think I've still got quite a lot to learn and it'll be quite a big step up," Fouché said of starting his first race with the squad. "I haven't been able to do too many big races with the New Zealand champ's jersey, so it'll be cool to do a few races with Mitchelton-Scott, show the Kiwi fern and get it out there."