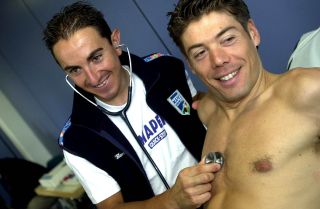 Miguel Martinez and his Mapei teammate Oscar Freire on the eve of the 2002 Tour de France (Image credit: Getty Images)

The former Olympic mountain bike champion Miguel Martinez is set to return to professional cycling at the age of 44. The Frenchman told L’Équipe that he has signed a six-month contract with the Amore e Vita-Prodir Continental team, where he previously raced back in 2008.

The son of 1978 Tour de France king of the mountains Mariano, Martinez was one of the stars of mountain biking in the 1990s.

At 20 years of age, he took bronze at the Atlanta 1996 Olympics before claiming the gold medal in Sydney four years later. He also was cross-country world champion in 2000, and he won the World Cup in 1997 and 2000.

Martinez switched to the road in 2002, signing for Mapei. He won a stage of the Vuelta a Navarra and placed 44th overall in his one and only Tour de France appearance that season. In 2003, he moved to Phonak, placing second on Mont Faron at the Tour Méditerranéen, before returning to mountain biking in 2004.

Martinez retired for the first time in 2006, but briefly returned on the road in 2008, signing for Amore e Vita and winning a stage of the Tour de Beauce in Canada. He made another comeback as a mountain biker in 2013, winning the Roc d’Azur and the Sea Otter Classic. In 2017, Martinez was French marathon cross-country champion.

Martinez told French website Cyclism'Actu that he had ridden up to 100km a day on the road during the coronavirus lockdown by using his bike to deliver food to the elderly, and that had given him the idea of returning to road racing.

“I said to myself that I could call the Amore e Vita team, knowing they were the only ones who could take me due to my age,” Martinez told Cyclism’Actu, adding that his programme will include the Volta a Portugal and the French Championships in Plumelec.

"At 44, Rebellin was still winning races, although he’s a road guy, whereas I was never a great road rider. But I had a sense of unfinished business and now, at least, I have one last chance.”