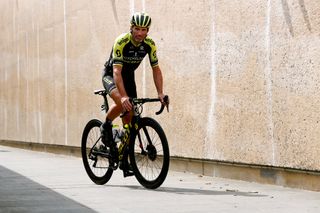 Michael Albasini (Mitchelton-Scott) has announced that he will call an end to his long racing career in June of next year. The 38-year-old will retire after competing in his home race, the Tour de Suisse, which will run from June 6-14.

Albasini, who has been with the Australian squad since its inception in 2012, turned pro with Phonak in 2003, and has taken 30 wins along the way, as well as competing in 14 Grand Tours.

"It's great to finish your career in a race that you really like as a rider," said Albasini in a team statement. "It's a race I've always had a good relationship with, it's a home race and for any rider it is great to be able to finish at home.

"Even within the organisation there's a lot of former teammates, so it'll be like finishing with your school class and it makes it much easier for family to come and that is one of the most important points."

After racing two years with Phonak, Albasini moved to Liquigas for four seasons before a three-year spell at Columbia-HTC and his final move to Orica-GreenEdge during their debut season.

Albasini has raced 15 editions of the Tour de Suisse so far, with his best GC result being 11th in 2009. He's also won three stages of the race, with the latest coming on the penultimate stage of the 2012 edition.

His victories at the Tour de Suisse count among 15 WorldTour wins during his career, including seven stages of the Tour de Romandie and stage 13 of the 2011 Vuelta a España, where he won the sprint from a 20-man breakaway in Ponferrada.

"This season it was getting harder to find motivation and to keep motivated. It cost me, in time, more and more energy, and often in the second half of the season it's different," he said.

"Like this, I have my finish line, and this is the best way to finish. I don't have any set goals in terms of results for this final part of my career. I just really want to nail my last preparation, do everything right and get up to the highest level possible.

"If I can get that, some results will come, but for myself I just want to have the best possible approach and shape for the last part of my career and enjoy myself. If it all comes together, there will be results, individual or for the team, but I will finish knowing I have done everything right and be proud of that."

During the 2014 Tour de France, Albasini hit the headlines after being accused of racially abusing then-Europcar rider Kévin Reza on stage 16. Albasini later apologised to the Frenchman, though denied he had used racist language.

Albasini's 2020 calendar hasn't been fixed yet, aside from his final race, though Mitchelton-Scott directeur sportif Matt White said that he'd start the year racing in Spain.

"We expect another big six months next year, starting somewhere in Spain in February and finishing on his own turf in Switzerland. There's still a lot of racing to go for 'Alba', but he knows where the finish line is, and that's at home," he said.

"Alba was a founding member and the first year, with Volta Catalunya for starters, he had some big wins and helped put this team on the board.

"Ever since then he has been a heavy contributor, on and off the bike, to the development of the culture of this team. It's a really nice at 38/39 years of age, that he can finish his career on his terms."