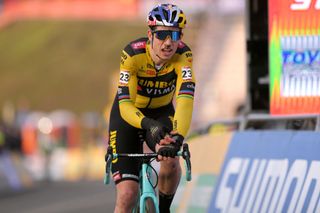 The risk of possible injury and damage due to Storm Ciara have forced the organisers of the Merksplas Superprestige in Belgium to cancel all of today's racing.

The organisers waited until Sunday morning to make a final decision but after consulting with Belgian security services, they confirmed the racing was cancelled.

The Merksplas race was new on the Superprestige calendar for the 2019/2020 season and was set to be Wout van Aert's final cyclo-cross race of the winter, just 24 hours after his victory at the DVV Krawatencross. His Jumbo-Visma team said Van Art would soon head to an altitude training camp on Mount Teide as he begins to prepare for his return to road racing.

Storm Ciara has been battering Britain and Europe in the last few hours and The Royal Meteorological Institute of Belgium issued a code yellow warning for Belgium, forecasting heavy rain and winds of up to 100km/h, and asking people to avoid making unnecessary travel.

"After consultation with the security services, we will unfortunately have to cancel the Superprestige race in Merksplas. This is to prevent the general safety of the riders, supporters and organization from being compromised," the race organiser confirmed via the Superprestige social media channels.

Ironically one of the few races to be held during Storm Ciara is the unofficial Netherlands Head wind championship. 200 riders will compete on an 8.5km road on the flood barriers near Oosterschelde in northern Holland. However even that event was suspended due to too much wind.

🇧🇪 #SPMerksplasNo race today due to the bad weather. What’s your feeling about that, Wout?☹️👇🏼 Of course, this decision is the right one to make #safetyfirst. 🔚The cancellation means the end of the cyclocross season for Wout 🔜 Altitude camp El Teide 🏔 pic.twitter.com/mcvtqM5gvFFebruary 9, 2020