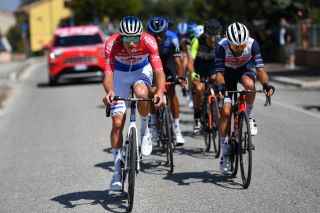 A summit finish on the 11-kilometre climb to Sassotetto was never going to be a day suited to the skills of Mathieu van der Poel, but on stage 5 of Tirreno-Adriatico the Alpecin-Fenix leader was out in the break.

The Dutch road race champion joined nine other riders on the race's 'queen stage', jumping away from the peloton in the opening kilometres and staying away for much of the 202km stage, only getting swept up by the peloton on the lower slopes of the final climb.

There were no ambitions for the win on a day when Simon Yates (Mitchelton-Scott) took the stage and race lead, of course. Rather, Van der Poel's time in the break was part of the plan to build form for his upcoming goals, namely the 'spring' Classics, which begin with Flèche Wallonne on September 30.

"My own level is OK, although I'm definitely not in top form yet," Van der Poel told Wielerflits after the stage. "But it's good enough. This race will give me the strength I need to be 100 per cent in the Classics.

Woods' win at Tirreno-Adriatico hints at form for World Championships

"It was a tough ride today. It wasn't bad to join the early breakaway. There was a lot of climbing to do, and the final climb was too hard for me to compete with the others anyway. I wanted to join a nice group in order to race for the climb. That went pretty well."

Van der Poel had spent the first two stages of the race working for Alpecin-Fenix sprinters Jonas Rickaert (seventh on stage 1) and Tim Merlier (fifth on stage 2), while stage 3 to Saturnia saw him take 12th, 33 seconds down on stage winner Michael Woods (EF Pro Cycling). Stage 5, however, was the first time Van der Poel had really shown himself at the front of the race.

"We haven't yet managed to win a stage, but we will continue to fight for it in the coming days," he said. "The last few days weren't too bad, although it was very hot a few times.

"I feel OK. It's a tough course and there are many good climbers here. They're preparing for the Giro d'Italia, so the level is high, especially when the road goes up."

The 25-year-old said that he could try for a stage win in the remaining stages of the race – a flat sprint in Senigallia, a hilly stage to the hilltop town of Loreto, and then the traditional 10km time trial in San Benedetto del Tronto.

A victory would be his first, barring his National Championships win, since the Tour of Britain a year ago. But it's not the be-all and end-all. Bigger goals are on the horizon, after all, even if he didn't mention a possible participation at the World Championships in Imola later this month.

"I'm still hunting for a stage win," he said. "Maybe on Saturday, but maybe – especially after Friday's hard stage – it's just too tricky. In any case, we'll go with the team for these last few days."