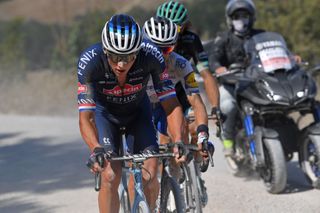 Mathieu van der Poel (Alpecin-Fenix) attempts to chase back to the front of the race after suffering a puncture at the 2020 Strade Bianche (Image credit: Getty Images Sport)

Mathieu van der Poel is "more than ready" for Saturday's Milan-San Remo, according to his Alpecin-Fenix sports director, Christoph Roodhooft, and the team has no concerns about the 25-year-old Dutchman not yet having found winning form just two races in to the restarted season.

"And then at Milano-Torino on Wednesday, it was the plan that Sacha Modolo would sprint, but Sacha fell behind due to Yves Lampaert's fall," he said of the crash that took down the Deceuninck-QuickStep rider and a number of others with around eight kilometres left to race.

"Mathieu tried to sprint himself, but our [sprint] train was on the wrong side, so he had to come from too far back," Roodhooft explained. "But he was feeling good. He's clearly recovered well from those extreme efforts at Strade Bianche."

Van der Poel had been riding strongly at Strade Bianche last Saturday ahead of suffering a puncture with around 70km left to race. Although he tried to chase back with Deceuninck-QuickStep's Julian Alaphilippe – who suffered a number of punctures – Van der Poel was unable to get back on terms, and trailed home in Siena in 15th place, just over 10 minutes behind winner Wout van Aert (Jumbo-Visma).

"Getting some decent results in the last couple of races would, of course, have been great," added Roodhooft, "but it's not exactly the end of the world, and there's certainly no reason to be concerned. It's not like all the hard work that has been put in over the past few months suddenly counts for nothing after only doing two five-hour races."

Last year's Amstel Gold winner and Tour of Britain champion will take on Milan-San Remo for the first time in his career. Van der Poel's father, Adri, twice finished seventh at the race – in 1986 and 1988 – but the younger Van der Poel will have set his sights higher than that.

"Things might be very different again in San Remo on Saturday," Roodhooft said. "Mathieu is more than ready."