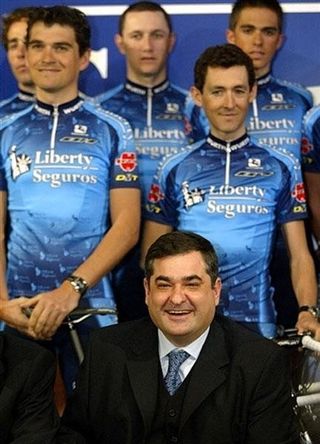 Fourteen years ago the cycling world was about to be rocked by Operaction Puerto: it was the last week of the Giro d'Italia when the Spanish Guardia Civil arrested then-Liberty Seguros team manager Manolo Saiz along with Eufemiano Fuentes and three others - the case would change the sport of cycling forever. Since cleared but blacklisted from professional cycling, Saiz has claimed in an interview with Alerta that his teams were the cleanest.

The Spaniard gave away very little in the interview, saying he has no need to tell the whole story anymore. "I will leave it for my grandchildren," Saiz said.

But he admitted the case robbed him of what could have been the best 14 years of his life. Until late 2005, when Saiz' star rider Roberto Heras tested positive for EPO after winning the 2005 Vuelta a España, Saiz was lauded as the smartest manager in pro cycling.

His teams - ONCE from 1989 to 2003 and then Liberty Seguros - racked up almost 500 victories and won the Vuelta a España five times (after Heras' disqualification was annulled following a successful argument that his doping control samples were mishandled).

Operacion Puerto, stemming from admissions from Kelme's Jesus Manzano, led authorities to Fuentes' Madrid clinic which they began surveilling. Saiz reportedly came to the clinic with a bag containing €60,000 in cash, allegedly to pay off the riders' doping treatments. At the time, however, doping was not illegal in Spain and Saiz escaped prosecution.

However, the case effectively ended Saiz's involvement in cycling - Liberty Seguros withdrew its sponsorship, Saiz stepped away as manager as Alexander Vinokourov brought in Astana to replace them, and former Tour de Suisse organiser Marc Biver took over as manager of the team.

Shut out of the sport, Saiz said the affair "plunged me into loneliness", leaving him with many regrets. "I was a brave man and it turned me into a coward; and a thousand other things, for example my children could have had other destinies."

Saiz says he regrets pouring so much effort into representing teams on the UCI ProTour Council. "Since 1998, having to travel a lot to represent all the teams in the world, I have not dedicated myself 100 per cent to my family and my team. I do regret that," Saiz said.

But when asked if his riders used blood transfusions or other biological methods, Saiz remained defiant: "They'll have to answer that."

"I have always said so and will continue to do so throughout my life. My teams have been the cleanest in cycling. That's what I'll stick with."