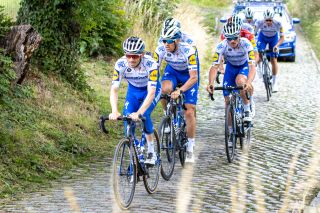 While Patrick Lefevere is eager to see professional racing return, the Deceuninck-QuickStep boss is well aware of the sport's precarious current situation. Racing resumed this week, and with the men's and women's WorldTours set to restart with Strade Bianche next week, teams are finishing training camps and putting final touches on their form.

However, despite the planned restart of the season, COVID-19 infection rates have spiked in some locations across Europe – and continue to climb rapidly in the United States. Even with health protocols in place, racing remains on a knife-edge and at the discretion of national governments and health organisations.

"I'm torn because the corona numbers are not good. In France, the GP Fourmies has been cancelled," Lefevere told Het Nieuwsblad.

"The Canadian races are also cancelled. Given the overcrowded agenda, that is certainly not a drama, but it sets the tone. The dominoes are falling again."

Paris-Bourges and GP Fourmies cancelled due to coronavirus pandemic

Québec and Montréal GPs cancelled due to coronavirus

At this stage, Lefevere and the rest of the cycling world can rely on an action-packed restart with three Grand Tours crammed into a 71-day window from the end of August. Several weekends should provide clusters of overlapping races, including one Sunday in October that sees the Giro d'Italia, Vuelta a España and the men's and women's editions of Paris-Roubaix running simultaneously. However, Lefevere is conscious that a second wave of the virus in the autumn could have devastating effects on racing but also the economies around the world.

Several teams, including Lefevere's, have already made financial cuts to help stem the effects of the virus on their sponsors' pockets, while teams like CCC Team are looking for a new lead sponsor after their title backer decided to pull the plug at the end of this season due to financial pressures. If cycling is forced to shut down for the new-look season and races like the Tour France are cancelled, it could spell the end for several high-profile squads.

When asked about his concerns, Lefevere told the Belgian publication that: "The aftershock is heavier than the earthquake itself and then everything closes again. At the moment, our training riders and staff in Passo San Pellegrino are driving to Burgos (where the Tour of Burgos starts on Tuesday, ed.) If [French president Emmanuel] Macron still decides to close the border with Spain again, we are done."

When asked about what the economic impact of a second lockdown could have on cycling's model, the team boss replied: "Then we shouldn't even talk about cycling. If a second lockdown comes, the damage will be incalculable. What would that mean for the global economy? Europe worked out a corona recovery plan of €1.8 trillion, as hundreds of millions are pumped into the economy in Belgium. But I suppose you can't keep printing money."