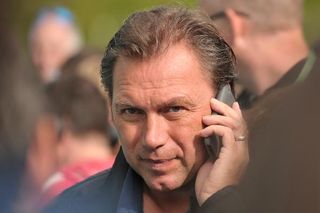 Johan Bruyneel, the former team manager of US Postal, Astana and RadioShack, who helped guide Lance Amstrong to seven Tour de France titles before they were struck from the record books for doping, has launched a new sports management company.

The Belgian, who is banned from direct involvement in pro cycling and all other WADA sports for life, has named his new venture 7evenPlusTwo. The company aims to work with athletes in a number of ways, including brand management, contract negotiations and life planning, as well as offering event organisation and promotion services.

The company name 7evenPlusTwo refers to the number of Tours de France Bruyneel won as team manager, including the seven vacated titles which were won thanks to "the most sophisticated, professionalized and successful doping program that sport has ever seen" in the words of USADA.

On the company website, 7evenPlusTwo is posited as an "international sports marketing and strategy agency."

It will cost you $30,000 to ride with Lance Armstrong for a week

Bruyneel banned for life by CAS, says 'we were children of our era'

Bruyneel on doping: It didn't start with us and it didn't end with us

"We manage sporting assets from large scale sporting events and their associated brands to life plans for individual athletes," the website reads.

"Our work with teams in all sorts of sports focuses on developing winning strategies, helping to turn good teams into great teams. Our strategies help individual athletes become sporting legends.

It is as-yet unclear whether the new company has any clients, though 7evenPlusTwo appears to be pitched at athletes, event organisers as well as sports team owners, current and prospective.

In 2014, the American Arbitration Association banned Bruyneel from any involvement in professional cycling for a 10-year period. A failed appeal to the Court of Arbitration of Sport in 2018 resulted in his ban being extended to a lifetime ban, upon which Bruyneel remarked that: "We were all children of our era, facing the pitfalls and temptations that were part of the culture at the time. We didn't always make the best choices.

"In spite of the CAS decision, it is still my goal and my wish to contribute, to help grow my sport and make it better in the years ahead."

News of Bruyneel's new venture raises questions about his eligibility to run a company of this nature, and presumably work directly with current athletes, considering his lifetime ban.

"No athlete or other Person who has been declared Ineligible may, during the period of Ineligibility, participate in any capacity in a Competition or activity authorized or organized by any Signatory, Signatory's member organization, or a club or other member organization, or in Competitions authorized or organized by any professional league or any international- or national-level Event organization or any elite or national-level sporting activity funded by a governmental agency."

In recent years, similar questions were raised when Bruyneel's former team leader Lance Armstrong hosted a podcast at the Tour de France and appeared on NBC Sports' television coverage of the race. The UCI told Cyclingnews that his work at the race did not violate the terms of his own lifetime ban.

As of last October, the US government was still waiting for Bruyneel to pay $1.2million as part of Floyd Landis whistleblower lawsuit under the False Claims Act. The Belgian was adjudged to have been "unjustly enriched by his fraud" during his time as manager of US Postal Service team.

Armstrong, meanwhile, was last in the news offering a five-day cycling holiday in Mallorca in late September. The trip, co-hosted by former teammate George Hincapie, is set to cost up to 12 guests $30,000 each.