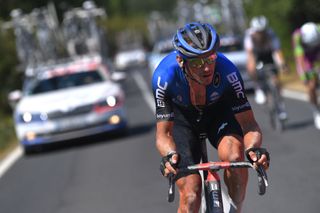 NTT’s Roman Kreuziger – pictured at the 2020 Strade Bianche – will be one of four climbers leading the WorldTour team’s hopes at the 2020 Critérium du Dauphiné (Image credit: Getty Images Sport)

It's a climber-heavy NTT Pro Cycling squad that heads to the climb-heavy Critérium du Dauphiné on Wednesday, hoping to take away stage wins and a high overall finish in preparation for the Tour de France at the end of the month. Roman Kreuziger, Ben O'Connor, Louis Meintjes and Domenico Pozzovivo all feature on the seven-rider roster to take on the mountainous French race over the next five days.

"The race is different to previous years when there was one sprint stage, one time trial and five hilly stages," said Kreuziger in a press release on Tuesday, with the race having been rescheduled on the calendar and cut to five stages, although it retains its function as a 'warm-up' race to the Tour.

"Now the race is just five days, but very concentrated on the hilly stages. I would say that there’s no proper sprint day, and mostly uphill finishes, so it's going to be very hard and tough with the heat and possibly thunderstorms in the Alps.

"We travel to some beautiful places," he continued, "and around where we finish the last two or three days, there are a couple of nasty climbs, so it's going to be very interesting.

10 riders to watch at the 2020 Critérium du Dauphiné

"We have a good team, but we saw at the other races that there are two really strong teams, which have been controlling the pace of the peloton for now," said Kreuziger, referring to Primoz Roglic's Jumbo-Visma outfit and EEgan Bernal's Team Ineos squad, "so we will have to race smart and try to make it into the breakaways to see if we can be successful."

"I'm really looking forward to the Dauphiné," Valgren said. "It's going to be five hard days of racing. There will be some intense days with, I think, a number of opportunities for breakaways. Personally, I hope that I can show the good form that's been coming from our training camp, and the hard work that we've been doing for the last month or so now.

"We're hopeful of some kind of result with this being the last big preparation for the Tour de France, so it should be a nice week coming up for the team," he said.

Sports director Gino van Oudenhove added: "This is ultimately all about the Tour for us. It's our final step in our preparations, and we will be looking at, and focusing on, that.

"We'll take it day by day, and try to pick out a stage where we can go for a win," he said. "The main objective will be to get ourselves totally ready for the Tour de France."