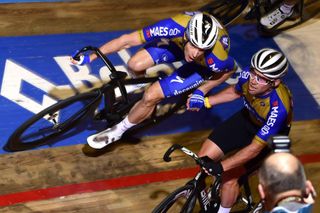 Deceuninck-QuickStep's Iljo Keisse is one of a number of riders whose contract is set to end after the 2020 season, with the coronavirus crisis – and its accompanying lack of racing – making things even more difficult for riders hoping to remind their team managers of their worth.

Thirty-seven-year-old Keisse recognises that other riders are "pushing to take my place", but also told Sporza.be's podcast, De Tribune, on Monday that he hopes to stay on with Patrick Lefevere's Deceuninck-QuickStep squad, where he's ridden for the past 10 years of his career.

A glimpse of glory: When domestiques have their day

Keisse re-signs for a year with Deceuninck-QuickStep

He was handed a new one-year contract by Lefevere last year, and it's not uncommon practice for older riders to sign agreements from year to year as they head towards the end of their careers.

"I'd like to stay with Deceuninck-QuickStep, but I certainly won't ride below the market price," he said. "At the age of 37, I'm still very motivated to race, and that's not because I'm at the end of my contract. I have been every season [on a one-year contract] in recent years.

"I'm not going to say whether I'd like to ride with another team," Keisse continued, "as then I might be faced with closed doors. I wouldn't dismiss anything, but I'd prefer to stay where I am."

Keisse managed to weather the storm that was his expulsion from the Vuelta a San Juan in Argentina in January 2019 after he'd feigned a sexual act behind a waitress while posing for a photo during a café stop in training ahead of the race. He apologised and had to pay a fine, and he and the team put the matter behind them.

"At the moment, it's especially important to be busy, and to make sure that you can start the shortened season in top condition and show that you're still worth your place within the team," he said on Monday's podcast. "The team knows what I'm capable of, and that ability is not gone after two months [without racing], of course.

"I'm confident in that, but, on the other hand, I have already said that you are only as good as your last 'game'. Other riders are pushing to take my place," said Keisse, who's made a name for himself as a domestique de luxe for his leaders at Deceuninck-QuickStep, helping at the spring Classics each year and forming part of the lead-out train for the squad's sprinters.

He's occasionally had his own opportunities, too, however, and in 2015 won the final stage of the Giro d'Italia in Milan.

Keisse also steps out of his domestique's role when he races on the track during the winter at Six Days. A seven-time winner of the Gent Six – arguably the most prestigious Six of them all – his success on the track has made Keisse begin to think about the way in which he might eventually retire.

"I'd like to win Gent one more time," he said, "but that might mean that I need to ride it another two or three times to achieve that.

"I've thought about the way I'd like to stop, and have always said that I'd like to race until the day I turn 40," said Keisse, who'll turn 38 in December. "That would be two or three weeks after the [2022] Gent Six, and when I get something in my head, it's difficult to shake it.

"So perhaps on the last day of the Six Day, I could hang my bike up on a hook at the 't Kuipke [Gent velodrome], and it would stay hanging there," he said.