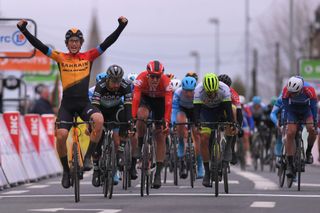 Ivan Garcia Cortina has signed a three-year contract with Movistar and brought to an end his time at Bahrain-McLaren.

The 24-year-old won a stage in Paris-Nice earlier this year and has shown considerable promise since moving into the WorldTour at the start of 2017. In 2019 he won a stage in the Tour of California and claimed third in the Grand Prix Cycliste de Montreal.

"I'm so happy to become a Movistar Team rider as of 2021. I've been at my current team for four years and always felt at ease there, but I feel like it's time for a change, to seek new ambitions, new goals, new motivation – and I think this is the right team to join this squad,” Cortina said in a press release issued by his 2021 team.

Cortina will spearhead the team’s future in one-day races and has his eyes set on Paris-Roubaix in particular.

“It's our home team, and we're chasing a common goal – I've always had one race in mind, one personal gamble, which at the same time is one of very few big races this team hasn't won yet, which is Paris-Roubaix. Dreams exist to be made real, and we'll fight for it starting next year."

The rider from Gijon won the Spanish junior road title in 2012 and rode for the Klein Constantia team before moving into the WorldTour. He raced the Vuelta a España in his first season as a professional.

Enric Mas was signed to lead the squad in Grand Tours, while Alejandro Valverde looks set to extend his contract for at least another year. The recruitment of Cortina adds depth and quality to the team, and helps freshen up their roster.

"Despite still being a young rider, Iván has already got the experience of a veteran," Unzué said. "He's a competitor which will give us a chance to turn many different kinds of sprint finishes into real winning chances, but above that, he'll allow us going into the big cobbled classics with a real shot at a good result. Iván has to be one of the big favourites at those races in the future."

In February, Bahrain-McLaren manager Rod Ellingworth told Cyclingnews that he was keen to extend deals for both Cortina and Belgian rider Dylan Teuns.

Teuns re-signed with Bahrain-McLaren with a two-year deal announced in early August.