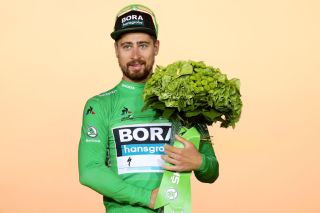 Hansgrohe has extended its sponsorship of the Bora-Hansgrohe men's WorldTour team for another two years, it was announced on Tuesday as the riders gathered in the Bavarian Alps for a get-together and pre-season testing.

The German bathroom fittings company has sponsored the German team since 2017, when they signed Peter Sagan and stepped up from Professional Continental level to the WorldTour.

With kitchen company Bora having agreed an extension to its own sponsorship deal last year, the team will be known as Bora-Hansgrohe for at least the next two seasons. Sagan is under contract with the team until the end of 2021.

"We are proud of the excellent performance of the team, which in addition to bringing sporting success, has also brought gains for our brand, Hansgrohe. The positive impact that has been experienced by the brand and its reputation confirmed our decision to renew our contract," said Hansgrohe's CEO, Hans Jürgen Kalmbach.

"Together with the team, we aim to continue this success story, and are looking forward to two more seasons as a sponsor and partner of the Bora-Hansgrohe team. We wish the riders and the management continued success."

Bora-Hansgrohe have enjoyed their most successful season since Denk launched the team - then known as NetApp - a decade ago. They won 47 races in 2019, with only four of them coming from Sagan as riders like Sam Bennett, Pascal Ackermann, Emanuel Buchmann, and Max Schachmann all reached a new level.

They ended the year second in the UCI WorldTour rankings but, in announcing the sponsorship extension, Denk affirmed the ambition to become the top team in the world.

"The team is very pleased about this extension with our partner, Hansgrohe. It is a testament to the hard work of the riders and the entire team during this season to achieve our common goals and be successful on the road," said Denk.

"With our strong partners, Bora and hansgrohe, at our side, we are on the way to becoming the number one cycling team in the world."

The team started out in 2010 as Team NetApp before a merger with Endura saw them race as NetApp-Endura in 2013 and 2014. In 2015, Bora came on board as title sponsor, alongside bike manufacturer Argon 18, before Hansgrohe took the second title spot in 2017.

📸 Happening right now at our team camp...The riders are being put through the paces with medical testing thanks to @lanserhof, and are also taking some time to shoot content with @Hansgrohe_PR.#hansgrohe #MeetTheBeautyOfWater#lanserhof #lansmedicum pic.twitter.com/QsbFfj5gJRDecember 3, 2019