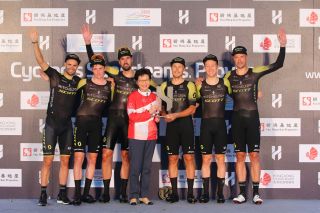 Velon and the Hong Kong Tourism Board have cancelled this year's Hammer Hong Kong race scheduled for October 13, due to the instability stemming from ongoing protests for wider democracy. The mass participation Hong Kong Cyclothon event has also been cancelled.

The protests have escalated recently, with Hong Kong police relaxing guidelines for using lethal force a day before an officer shot a student at close range.

"We have been keeping matters under close review and it has now been decided that the best course of action is to halt preparations and look to 2020 when the Hammer Series and the world’s top professional cyclists will return to the streets of Hong Kong," Velon said in a statement.

Velon is owned by 11 of the biggest WorldTour teams, including Team Ineos, Deceuninck-QuickStep, Jumbo-Visma and Mitchelton-Scott and so the Hammer Hong Kong race was expected to attract a number of big-name riders, who would probably then end their season at the Tour of Guangxi in China.

With Hammer Hong Kong cancelled, Team Jumbo-Visma will be crowned the overall Hammer Series Champions of 2019, even if the UCI has refused to sanction the Hammer events as an official series.

The Dutch team leads after winning Hammer Stavanger in May and taking second place overall in Hammer Limburg in early June. Deceuninck-Quick-Step is second after their victory at the Hammer Limburg, with Team Sunweb third.

"We're sorry that the fans won’t get to see the best teams in the world go all-out for overall victory in the Hammer Series in Hong Kong again this year," Velon CEO Graham Bartlett said.

"However, Team Jumbo-Visma were the standout team of this year's Series and they deserve the title. We are already in the middle of planning next year’s Hammer Series and we look forward to being back in Hong Kong for the big Hammer Series finale in 2020”.

Their hopes for radical change have been slowed by the UCI's control of the sport and the long-standing influence of the major race organisers. Velon recently lodged an anti-trust complaint to the European Commission, claiming the UCI has hampered the development of its Hammer race series and tried to take control of on-bike rider data by changing the rules.

"In the past 12 months the UCI has used its regulatory power and political leverage to seek to block the business activities of Velon and the teams in an incorrect and unlawful manner," Velon claimed.

Cyclingnews understands the European Commission will take several months to decide if it will even hear the case, with any final verdict likely to take several years.

The UCI told Cyclingnews it had not yet been notified of the complaint but that when it is, any necessary steps would be taken.